Artist description: Yale Rowing Club Headquarters on the Housatonic river. The finish line is on the far shore in reality.
Notice the squared off tree tops, this style I used in my early work, and reappeared in my later work.

Woldemar Neufeld died on November 24 from complications of Parkinson's disease, shortly after his 93rd birthday.
Date of Original
1978
Image Dimensions
Image Width: 10.7in
Image Height: 17.7in 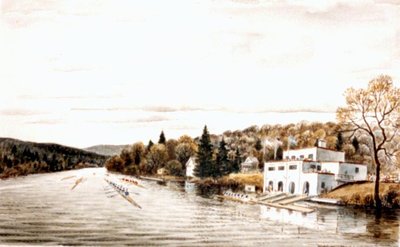