Artist description: This watercolour has a special place in my heart because of the Conrad block, the tall building with the high windows. That was the hardware store owned by my wife's father.

At the back there was a tinsmith shop with all the necessary equipment. I used to hang around there contemplating involvement because the store was about to declare bankruptcy. I am still fascinated by hardware stores.

Woldemar Neufeld died on November 24 from complications of Parkinson's disease, shortly after his 93rd birthday.
Date of Original
1980
Image Dimensions
Image Width: 18.7in
Image Height: 28.5in 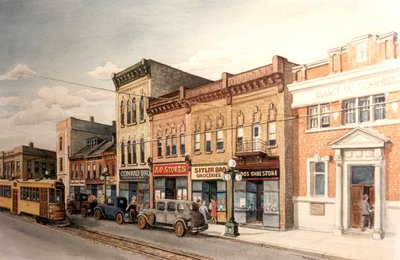