Artist description: This colour print was made in honour of the US 200th anniversary celebration. The Coast Guard brig is greeted by the New York Fire boat - a custom on other important marine occasions like the arrival of an important ship on its maiden voyage.

Woldemar Neufeld died on November 24 from complications of Parkinson's disease, shortly after his 93rd birthday.
Date of Original
1976
Image Dimensions
Image Width: 23.8in
Image Height: 13.6in 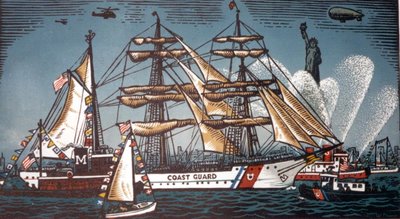