Artist description: This print was made when I realized how popular the first edition would be. This print has the three buildings on the right which the first version does not. Many people in these three buildings are my customers and have become good friends. The East River is below the snowy promenade and the body of water on the left is the East River.
The little block between the tall building is where we lived from 1945 to 1949.

Woldemar Neufeld died on November 24 from complications of Parkinson's disease, shortly after his 93rd birthday.
Date of Original
1972
Image Dimensions
Image Width: 23.3in
Image Height: 13.2in 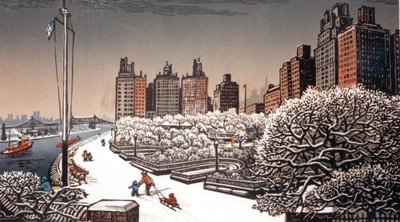