Artist description: This black and white print was made as a companion to West Montrose, and as usual it did not sell. Maybe some day I will cut another block for colour. This is a dramatic print. Almost like a wide open yawning mouth.

Woldemar Neufeld died on November 24 from complications of Parkinson's disease, shortly after his 93rd birthday.
Date of Original
1978
Image Dimensions
Image Width: 15.9in
Image Height: 9.3in 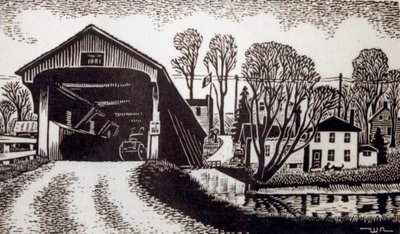