Artist description: This is the settlement that saved me from giving up Cleveland. I went to school in the mornings and worked in the afternoons, but because I was on a student visa I was not allowed to hold a steady job. The authorities found out and deportation was a possibility. The School helped by finding me work teaching under-privileged children in another settlement in exchange for my room and board. My spending money came from sales which the Goodrich Social Settlement encouraged through its board members.

Woldemar Neufeld died on November 24 from complications of Parkinson's disease, shortly after his 93rd birthday.
Date of Original
1936
Image Dimensions
Image Width: 9.9in
Image Height: 8.4in 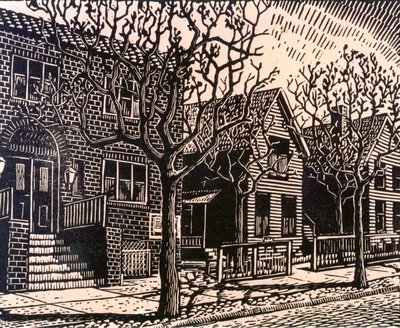