Artist description: During the summer months the Waterloo Band used to give concerts in the Waterloo Park. This was always a festive occasion. The girls came in their best dresses and the boys in their best Sunday outfits. They came to find the fairest maiden to escort home after the concert. At times we would even sit down on the benches and listen to the music. The two yellow brick buildings were the dressing rooms for the bathers.

Woldemar Neufeld died on November 24 from complications of Parkinson's disease, shortly after his 93rd birthday.
Date of Original
1980
Image Dimensions
Image Width: 20.5in
Image Height: 14.6in 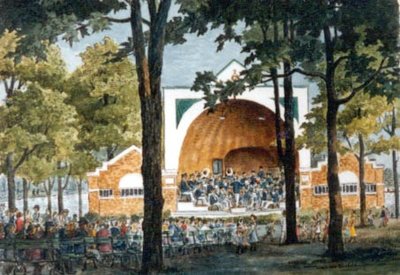