Artist description: This is another sketch for a larger oil. When I see a bridge I just have to paint it even though it may be just ordinary steel beams supported by ordinary concrete pillars. It is the surrounding atmosphere that gives a bridge the importance.
Notes
The Wilfrid Laurier University Permanent Art Collection cares for approximately 400 pieces by Woldemar Neufeld.

Woldemar Neufeld died on November 24 from complications of Parkinson's disease, shortly after his 93rd birthday.
Date of Original
1976
Image Dimensions
Image Width: 13in
Image Height: 7.9in 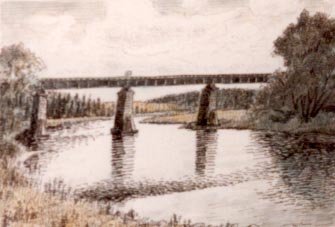