Artist description: This watercolour was a challenge like none other. I used the Waterloo map, then drew the various positions in perspective on shapes of paper, then imagined the raised forms from the base. The building on the far left was the Waterloo Market building and the tall structure the Waterloo Fire Station.
The building on the right is the present Police Department which used to be in this building in the upper left particularly hidden by trees. This building is now Canada's Habitat for Humanity headquarters.

Woldemar Neufeld died on November 24 from complications of Parkinson's disease, shortly after his 93rd birthday.
Date of Original
1980
Image Dimensions
Image Width: 28.7in
Image Height: 19.7in 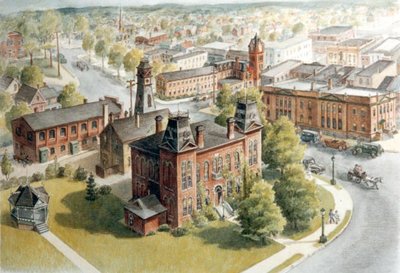