Artist description: This colour block print was made from four blocks cut and inked by hand. There are no two exactly alike.

Woldemar Neufeld died on November 24 from complications of Parkinson's disease, shortly after his 93rd birthday.
Date of Original
1986
Image Dimensions
Image Width: 24in
Image Height: 14.2in 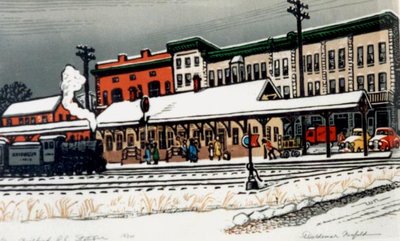