Artist description: Bridges are nothing new in my paintings. Here is the remains of a bridge which somehow spoke to me of the good old times when one lane bridges were still considered practical. I found this on the Northfield Road on the way to Conestoga.

Woldemar Neufeld died on November 24 from complications of Parkinson's disease, shortly after his 93rd birthday.
Date of Original
1983
Image Dimensions
Image Width: 24in
Image Height: 18.1in 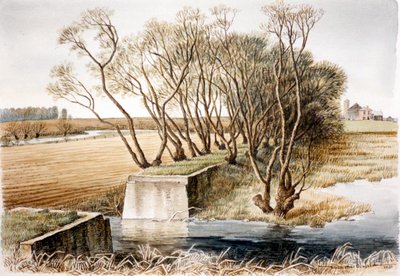