Your letter just to hand I was very glad to hear from you again, and trust that you health continues fair and that years of usefulness still be before you in which by your consecrated influence you may continue to help and stimulate our Lutheran pastors throughout America. Since I wrote you last I have been continuing as assiduously as circumstances would allow my course of reading. I finished MacClear on the Creeds and read also carefully Cooperrider’s “Means of Grace” and Geofen’s “Baptizeim” and “Eucharist”. Of these I appreciated Cooperrider the most, though I also found considerable

material of interest in Geofen’s books, especially in the historical quotations. I found Cooperrider especially fine on the Lord’s Supper. But on the baptism of John the Baptist, neither Cooperrider nor Geofen is satisfactory. They make practically no distinction at all between it and Christian baptism as instituted by Christ. I have started to read Zezschwitz through. He is thoroughly logical and very interesting and instructive and only occasionally is there any fault to be found. I have only read a few papers, i.e. consecutively from the beginning of the book, but was especially pleased with his treatment of the 3rd Commandment with its clear distinction between the O.T. Sabbath and Sunday. I glanced somewhat hurriedly at his treatment of the baptism of John the Baptist in its relation to Christian baptism and I think he is equally clear on that subject. On the Lord’s Supper, while his doctrine is all right, he makes the uncalled

for concession that “is” frequently means “signifies” – an admission on which Luther staked the whole case. But Luther so thoroughly covered the ground on Baptism and the Lord’s Supper in his work on the Sacraments, which I have in the Henkel English edition, that I don’t think I have come across any points absolutely new that he did not touch upon. I have finished the first volume of Godet’s commentary on St. John and have read part of the second volume. He is very good and very clear, but I became quite indignant at his intense subordinationism of the Son. His [?] leaves the Lord in His state of humiliation not much more than a man with a sort of telephonic connection with the Father. He also is not thoroughly sound on the inspiration of the Scripture, placing too much emphasis on the accuracy of St. John as an eye witness connecting the misimpressions made by the “traditions” recorded by the Synoptists. However, this may be forgiven

him in view of the fact that it is precisely the Gospel according to St. John that the whole school of negative critics are up in arms against. I am now reading again “Luther’s Primary Works” – Wace & Bucheim. Is Tainbaim’s Typology of Scripture worth reading? I have it in my library, but have not read it. I would be glad to have you recommend any other books you see fit and will get them when I can. We had a long spell of mild weather without any snow until last week. Since then the sleighing has been good and we have had considerable zero weather. The thermometer was down to 12° below last night. The consecration of my new church at Newburn, the Ter[?] Memorial, came off successfully on the 5th Sunday in Dec. It is handsome and churchly in every respect. But I’m afraid I write at too great length and take up too much of your valuable time. With best wishes and kindest regards. 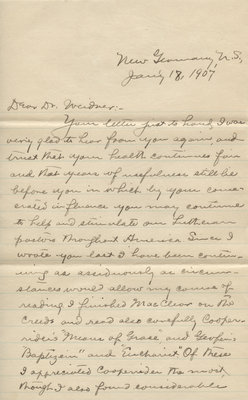