Your very welcome and most interesting letter was received this morning and read with much pleasure. It is already late, but I will stay up a half hour or so and give you at least a brief reply. To make up for my own brevity I am enclosing a letter from Carolus and some verses written by Herman. The boys seem to be both making good at school and like to go. They have been assigned pieces also for the English Christmas Service in St. John’s. The baby was quite sick for several days from cutting his eye teeth but is better again though still quite weak. While I think of it Bonnie says I should ask you if there is any news from Herminie. We are having cold weather now but bright and fine. I am all but out of coal again but have the promise of a ton for tomorrow. I borrowed $50 in order to pay for coal; so that as soon as it comes in again I will be able to lay in a little supply. The cost of it is $9.50 per ton. You are worse off in many respects than we are. We are not restricted as yet as to the amount of sugar or anything else we may purchase except as prices restrict

us. We use a great deal of corn meal, but even that is very expensive 5₵ per lb. We still have an occasional cake, which I presume you have cut out entirely. This war business is rather expensive and I imagine many of the American people will wish before it is over that the United States hadn’t embarked on such a luxurious undertaking. We Canadians will have an opportunity to pronounce to some extent on the subject on Dec. 17. The government is making a mighty effort to carry this riding and the big manufacturing interests are bringing pressure to bear on their employees, but with what effect only the election will disclose. They are threatening to close down and remove their plants from Kitchener if the people do not elect a union representative. Kitchener and Waterloo are said to be for their size the greatest manufacturing centre on the continent. The Rev. Dr. Sperling who was arrested some time ago and threatened with internment was released by the Ottawa authorities last week, there being no case against him. He preached in his church again Sunday. If he hadn’t gotten off the congregation intended to call on me to supply them. This congregation is independent but very large and very wealthy. They have a communicant membership of over 2000 -the largest Lutheran Church in Canada.

They have also a fine large Church, beautiful chimes and an Italian marble altar that cost $10000. I was sorry to hear of Rev. Murray’s resignation. It will be many a day before the congregation will find his equal as a preacher. I wonder where he intends to go? It never occurred to me that last Thursday was American thanksgiving day. I have lost track of American holidays. Our Thanksgiving Day was Oct. 8. Extend to Pearl our hearty congratulations over her success in carrying off the prize for musical composition. She must be quite an expert and should soon be able to turn her talent into money. I hope she will not be frightened out of her wits in responding to the speech of presentation. She should feel that she is as good as any of the rest of them or a little better, or she would not have taken the prize. I am getting along very nicely with my work and enjoy it more and more every day. But I must close for this time. With much love from us all, I am 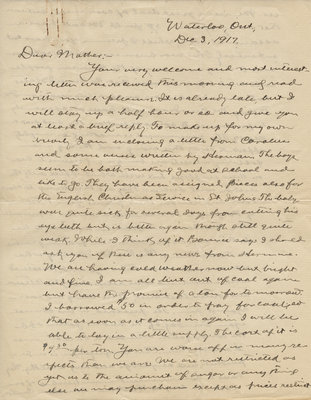