Your most welcome letter together with its valuable contents was received some days ago, and gave great pleasure to us all. It contained a couple surprises. One was that Clarence had a “Robert” also. We received a notice of his boy’s birth, but no name accompanied it, and we were not aware that they had called him “Robert”. However our boy was born Robert and has been registered officially as Robert Paul, and Robert Paul he will remain if the heavens should open up and rain Robert Littles for forty days and forty nights. Another surprise was the number of living grandchildren you now have, and the inference drawn there from that we who were married all but last were the head leaders in the production of your numerous progeny. The baby is the best little fellow we ever had and gives us the least trouble of any. He sleeps all night only waking up once or twice to be nursed.

He is growing fast and getting fat and Bonnie says he smiled yesterday most perceptibly and distinctly. He notices everybody and everything and displays a wonderful amount of intelligence for one of his days. Bonnie is quite well and is able to dress again, though she says she had nothing to wear, and we will probably take him to Church and baptize him Sunday morning. Arthur feels very big, and in fact he looks it, since the baby came. He doesn’t want to be called a baby any more, but says he is “father’s boy.” He talks about the automobiles, electric lights, horses and buggies and busses and the moon and the stars, and in short, about almost everything of things terrestrial and things celestial. He knows and can name the MacIntoshes, the MacMartins, the Whittebers, the Casselmans and thee Schwendtfegers and many others too numerous to mention in detail. I can’t say yet whom the little baby favors, but can only state that he is the handsomest and

the smartest of all. Bonnie thinks he is the only baby that ever was and that she never had one before that began to approach being half so cute and sweet. For several days now we have had very cool weather. Sunday and since till to-day I had to lay aside my summer coat and the nights would probably have brought frost but for the wind that prevailed. It is a little warmer to-day. My tomatoes are turning out fine. I pick from one dozen to four dozen ripe ones nearly every day. We have quite a few cucumbers too, but they are not bearing so well. The beans have been loaded but are now about over their bearing period. I think we will have plenty of corn by the last of this week. The Trustees finally got a move on and have had a man digging a new cesspool for us for several days past. I don’t know how long it will be before the thing is finished, but am in hopes that everything will be complete before the cold weather comes.

Pastor MacIntosh and his family left yesterday for their home. He didn’t preach for me but I enjoyed having him around. Our Conference, Luther League Rally and Sunday School convention will be held in Montreal Sept. 3-4. I am on for an address at the Sunday School Convention and for a Response as President of the Eastern District Luther League. Our Province will go into prohibition the 16th of Sept. It was passed by the late Parliament as a war measure to be in force for three years. This will knock out three bars in this town. I wonder what you think of the war by this time? It looks to us almost as if we had already won it. Is Herbert going to vote for Wilson? or for Hughes? Well, I must close and get this down town. Robert Paul thanks you for your kind present. With love to you all, 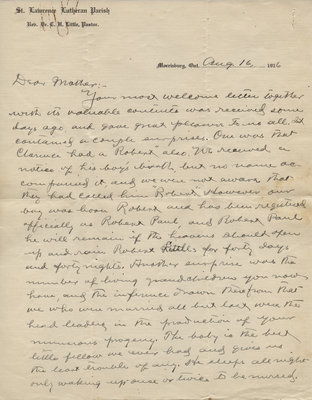