Meeting opened with the National Anthem followed by a prayer by Rev. Wittig.

The meeting was told of the passing of one of the most faithful members of the Auxiliary in the person of Mrs Louis Peine and out of respect for Mrs Peine one minute of silence was observed.

remarks said that the work of the Women’s Auxiliary was indispensable. He referred to the work of Mary as told us in the Bible & how she was prompted to do all this work out of love. Love will never die and he asked the Ladies to continue in their work. Any little thing the ladies can do if done out of love will bud forth into something good. The speaker also said that one thing we all are prone to do is to be careful lest we might over work ourselves for the Lord and often say “why should we do so much work while others do nothing. We should not measure ourselves by others & when we do set about to do anything we must do it on time lest we do it when it is too late. What would happen if we would have to close Waterloo College on account of our being too late – not only with our financial but also

The cause for which we must labor to continue our college and Seminary is that our children may continue their education under christian influence.

Mrs Collins of Westmount voiced her pleasure at being able to be present at the meeting.

The minutes of the last Annual meeting were read and adopted

Letter of thanks from Miss Gladys Quehl was read thanking the Auxiliary for the scholarship.

The President here stressed the raising of funds – not by donations made by the Ladies Aids but by the canvassing of all the women of the church. The representatives from various congregations told how they raised their money. Mrs Karl Bornhold of St Peters Kitchener offered on behalf of the Dorcas Society of that church to make quilts for the College and Seminary. This matter will be looked into and if any are needed the St Peters ladies will be advised and their offer thankfully accepted.

The President retired from the chair and Rev Kalbfleisch of Elmira took charge of the meeting.

the office of President. This resignation was accepted with regret on motion of Mrs CS Roberts seconded by Mrs KL. MacIntosh – Carried

Mrs Meyer brought in the report of the nominating committee and the election of officers resulted as follows.

Since the slate of officers included another officer – Honorary President for life – permission must be obtained from the Board of Governors and the Secretary was authorized to procure same.

Before closing Rev Kalbfleisch addressed the meeting and spoke most fittingly of the work of our retiring President and on behalf of the Auxiliary presented Mrs Conrad with a beautiful bible.

This was followed by more words of praise by Rev Wittig who on behalf of the Alumnae of Waterloo Seminary presented Mrs Conrad with a gold cross & chain, the cross bearing the words “from your boys”.

Mrs Conrad thanked everyone for their kindness to her.

After the repeating of the Lords Prayer and the Doxology the meeting adjourned to the first floor where delicious refreshments were served. 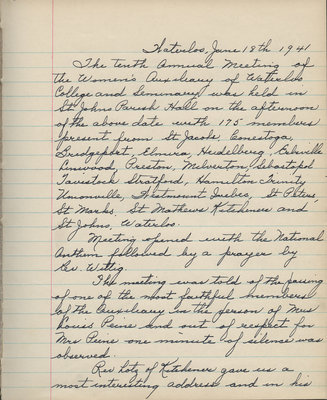