At a meeting of the Board of Governors of Waterloo College and Seminary held in May the following officers for the Parent Organization of the Women’s Auxiliary of the Evangelical Lutheran Seminary of Canada were appointed.

a membership fee of $1.00 per year per member. The funds thus raised were to be forwarded the Parent Auxiliary and were to replace the money and work donations of the respective churches. This appeal was sent to 45 pastors. Replies both verbal and in writing were reseived from approximately 20.

A second appeal was forwarded a few weeks later and this brought in a few more responses. So far we have received 28 replies – some forwarding their usual donation others advising that they have organized and forwarding the annual fee. Two quilts were received from Nova Scotia.

move, especially since such a sale is a big undertaking and the responsibility of same usually falls on the shoulders of the few “Willing Workers”. By this new method of raising funds the responsibility is divided and no one is over-taxed.

Our Treasurer reports receipts this year of $922. as opposed to $ raised by Sale of Work. These figures should be sufficient proof to show that our new venture is proving a financial success especially after many more of our churches come across with their usual donations.

During the year very few outside churches have had Visiting Day at our College. We would like very much to emphasize this phase of the work especially since if the women would come to Waterloo College at least once a year they could

then see what is really being done by our women or what could be done.

Notice of the first General Meeting to be held at St John’s Church Waterloo at 3 P.M. June 1st was forwarded to each and every church irrespective of whether they had organized or not. An invitation was extended to all delegates to be the guests of the Waterloo Branch of the Auxiliary. 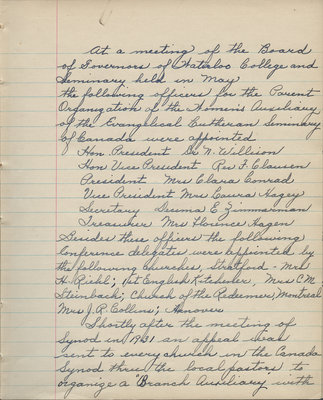