As I didn’t get to write you last night I will see what I can do this morning. Yesterday we had our annual Sunday school Convention down at Rose Bay. I drove down in the morning and back last night after service, reaching home at exactly 12 o’clock. It was about half past one when I got to bed so I didn’t get a surplus of sleep last night. We had very cold weather for our convention and it was a busy time too with the fishermen down the river and along the shore. Everybody was making fish. The weather was so dull and stormy through October that not a fish was made and, if you will permit a mixed metaphor, they found it necessary yesterday to “make hay while the sun shines”. This naturally affected the attendance considerably. But the convention made up in quality what it lacked in quantity and was quite enthusiastic. There were many and good discussions. I have been systematically training the young pastors to take part in all discussion and by constant urging and nagging and setting of example, I have been in large measure successful and we now have quite interesting meetings. In spite of the comparatively small attendance we easily

raised the $30 which the Convention had apportioned itself for the Porto Rico mission, which was better than we have done at the Convention for some years. Since Reformation day we have had a foretaste of winter. It froze 2 inches of ice one night and has been quite cold ever since. We had snow squalls Oct. 31 and some little ones again yesterday and the ground is frozen hard every morning. I preached on Reformation Day in the evening for Pastor Pifer in the Schmeisser Memorial Church at Middleton, (Lun. Co.). It was the first time I had been in that Church and was up to that time the only Church in the Synod that I had never been in or preached in. It a very nice little country Church. Pifer and I had been out on a partridge hunt that day in that section, but we only saw two birds and they were on the wing in the woods and we got no shot at them. I, however, shot a rabbit. I shot another one in the woods just back of the house here Monday and expect to get several more around here this fall. The partridge season, however, is over. We are only allowed one month for shooting partridges in the country. Saturday I went down to Chester on the train and preached there Sunday morning and afternoon. The Mahone people sent a team down for me and I drove up to Mahone and preached in the evening. William Herman was over with my horse and drove me back home Sunday night. This coming

Sunday I am exchanging with Pastor Weaver and will preach in Lunenburg and in the remodeled South Church. I was away at the time of its rededication and have not seen it since it was finished. Pastor Glenn declined the call to Rose Bay and I learn that Pastor Walborn will also decline the call to Mahone Bay. It begins to look now as if these parishes will have to be vacant all winter and wait for pastors from the Seminary graduates. But I still hope that we will find someone for each of these places before that time. I would like to be relieved of some of my preaching, for the reason that I am never at home on Sunday and Bonnie and the children never get out to Church. Besides I have a lot to do in editing the N.S. Lutheran and attending to the affairs of the Home. Marion all but walks alone now and she says quite a few words in addition to going through her voice culture and vocal exercises. The boys have their pulpits out in the hall and preach every day. But I must close. With love from us all. I am 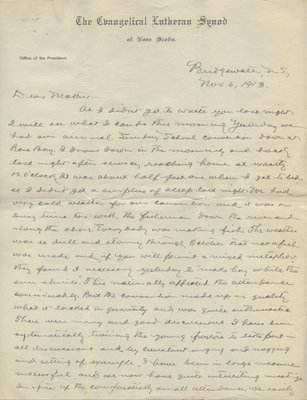