As it is raining this morning – just pouring down in fact – and I can’t get out to go down town, I will take advantage of the opportunity to write you a letter, which I can take down and mail when I do get off. October, following an unusually dry summer has been an exceedingly rainy month. Its fine days could doubtless be counted on the fingers of one hand, but it has been a very mild month. The pastures and fields are greener than they were at any time during the summer. My second crop of nasturtiums are in blossom and are as fine as was the first crop. They came up from the seeds dropped by the first ones. Fortunately we have all our potatoes out and in - i.e. out of the ground and in the cellar. I think we got about 175 bushels, of which I sold 50. The rest, I suppose, we will have to keep for eating and for seed. Our cabbage and turnips are still in the field, except 75 or 100 bushels of the latter which I have sold. I got 30₵ a bushel for the turnips and if the price keeps up I think I will sell practically the whole crop, of which I think we will have 1200 bushels or so. We have some fine extra large heads of cabbage, but I think we will

need it all for our own use and for kraut. I intended to go out hunting partridge yesterday but the weather was too threatening. We have only two more days for bird hunting, as the fine goes on Nov. 1. However, we can hunt rabbits till March. I shot one Saturday in the woods just below the house and I shot another one yesterday. Rabbits are quite plentiful and are good eating. They are much larger than the Southern cotton tails. Last Sunday I preached in the morning here at Bridgewater and baptized Pastor Buchholtz’s baby.

I was slightly misinformed as to the name. It was Miriam Pauline instead of Marion Pauline. It seems strange that they should call one child Mary and the other Miriam, as these are only two forms of the same name, the Virgin Mary’s name being Miriam in her native tongue. It was very rainy Sunday, but I slipped down and back between the showers. I did not get to my afternoon appointment on account of the rain, but managed to get to Mahone Bay during a lull in the storm. But about Church time it rained a deluge. Only about 20, mostly men and boys got out to Church. There was no organist, no choir, no singing, no liturgy. I just read the Epistle and Gospel recited the creed, preached a short sermon and closed with the Lord’s Prayer and benediction. They want

to keep the Church open till they get a pastor, so I suppose I am in for regular service every Sunday for some time to come. Nothing has been heard yet from the last man they have called. I haven’t heard anything yet from Pastor Glenn either, who was called to the Rose Bay parish. It seems hard to get Yankees to come to Canada. I had a letter this week from Pastor Baisler of Winnipeg complaining to that effect and asking me if I had any available men to spare in Nova Scotia for Western work. The General Council Mission Board under Kunzmaner and Bieber has taken Toronto out of President Maurer’s hands, and Bieber is himself in charge there for an indefinite period and he claims the right to nominate the pastors, so I can’t depend upon going there. It would be a nice place and I believe I would have received a call there if he hadn’t interfered, but it is all right and I am just as well satisfied. It would have been pretty hard any way to make ends meet on a salary of $1200 in a city like Toronto where one would have to pay house rent.

Marion doesn’t walk alone yet but she can get up anywhere as long as she can get one hand on anything and she has great times standing up by the bed or looking out the window with the boys. She is a perfect beauty and always has a smile for everybody. She reads every paper and book she picks up and says ā ē ō ōō äh. I taught her these vowels and she uses them in singing too. Carolus

and Herman have great rivalry and get into many disputes. The other morning Carolus said, “This is morning.” Herman said, “No, this is not morning; this is afternoon.” And when Carolus reaffirmed his position Herman said “It’s a funny morning.” If anything isn’t just right, Herman always says “It’s a bad piece of business.” He is a cute little fellow. Carolus played barber with him one day and cut his hair and made so many gashes in it that it looks a sight. The Nova Scotia Lutheran comes out the first of the week. This is the 4th number I have gotten out since I became Editor again this last time. I will have to get to work on next month’s issues pretty soon again. We will have our Sunday School Convention at Rose Bay on Nov. 5. I am on for an address on Missions in the S. School.

I can’t think of any more news at present. Besides dinner is ready, so I will close. With love to you all, I am 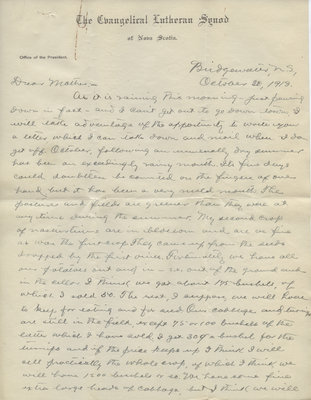