OFFICE OF THE PRESIDENT}

I would have written you last night but was away from home. Mr. Evans and I drove back to Lapland last evening for a little hunt of small game. We had a very poor day for it to-day, however, as an extremely high wind prevailed which made it almost impossible to hear the game and also rendered the birds wild. However, we did not come back altogether without prey. Each of us shot two partridges (Pheasants) and one rabbit, which will make a good mess for dinner to-morrow. We left Lapland shortly after dinner and just as we reached Bridgewater city it began to rain and it is still keeping it up with heavy wind in a sort of belated equinoxial gale. But we are quite thankful for the rain as we have had nest to none all summer and it is drier even than the dry summer when you were here. We have had to haul water for washing for quite a while and had a choice of either drinking dirt or lime – the latter from a well that was cleaned out this summer and well-limed. I hadn’t had a decent drink of water since I came home till I went to Lapland yesterday. It was just as dry there as here but there is a spring in the settlement from which the community could get good water. I brought a jug full of it home for Bonnie. The Bridgewater

town water was also bad and dirty. There were at least ten cases of typhoid fever in Bridgewater, probably all attributable to it. All the small streams and many of the larger ones were completely dry and the roads very dusty. So I think everybody is well pleased with the rain and should be thankful. I have not yet recovered from my Toledo cold. It was very bad yet Sunday and I preached in the Conquerall Parish with difficulty. But to-day I am much better. I think being out in the pine and spruce woods was a good thing for me. We had a heavy frost night before last which killed everything. We had up to that time been having plenty of corn and cucumbers for table use. We may get a little corn yet, but the cucumbers are a thing of the past. We made just about 100 bushels of oats, but we cut a good deal of it green for feed for the cows as they could get nothing out of the pastures. We have five cows that we milk now. We also have about 15 hens and are getting lots of eggs. We are able to sell some butter and eggs occasionally again. My hens are all full blooded white Wyandottes and I have a couple roosters of the same thorough-bred stock. One rooster that I sold took first prize at the Exhibition at Bridgewater last, as also did a jersey heifer that I sold. I would not have parted with the heifer but she would not get with calf and we did not want to feed her over winter for nothing. Pastor

Pifer has gone off on a moose hunt, and I am to supply for him next Sunday. After that I will be regularly engaged, dividing my time equally between the vacant Rose Bay and Mahone Bay parishes. However, I am in good hopes that they will get pastors this fall. The Mahone Bay parish has already extended a call to the man I recommended and the Rose Bay parish has notified me that it will do so without delay. I think from conversations I had with these men at Toledo that they will come, and so our troubles in that line will have an end. While I was away the Rose Bay Parish extended a call to Pastor Weaver, he having given some of them some encouragement to believe that he would accept a call. But when it came he declined it. He is anxious to get away from Lunenburg but when he leaves there he wants to get out of Nova Scotia. Our girl is still with us, but will leave next week. I have no girl to take her place as yet, but have written to one in Hemford whom I may get. Harold DeLong was operated on last week in the Halifax Infirmary for tubercular peritonitis, but the operation was not successful as far as results are concerned. The Drs. hold out no hope for his ultimate recovery though they say he may last for a year or so. It is too bad, as he was such a promising boy and is only 16 years old or about 17. Little Lynton is at the same Infirmary and also went through an operation and is improving. His step-mother is with him. He has no tubercular trouble

but had trouble with his hip bone, the result of a fall and the bone had to be scraped. “Minnie” is home sick in Portland and talks of coming back east. But I don’t know whether she will do so, as she sold her house and has no place to go to here. I have had our furnace going ever since I came back and I suppose if I had been here it would have been going long before. We had practically no hot weather this past summer. You should see Marion now. She is the quickest moving child you ever saw and anything the boys are into she is into. They have great times playing together. She gets over the floor on all fours and it is surprising how rapidly she can do it. She says “I see”, “hat” and a few other words and is the jolliest and prettiest little thing I ever saw. She is such a mite, compared with our strapping big boys. But it is getting time for me to put the orphan children to bed, so I will close. With love to you all, I am 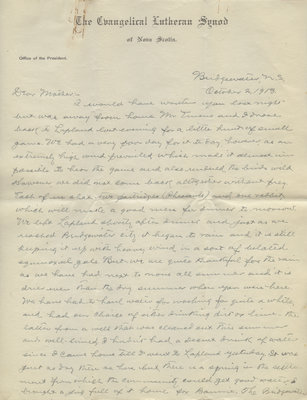