I know you are anxiously waiting to hear some further word from us, so I will write you a letter to-night before I leave for Lunenburg in the morning. Our Synod is to meet there tomorrow evening and I must be down in time for an Executive Committee meeting in the afternoon. Consequently I will have to take the morning train. I am glad to be able to inform you that Bonnie is doing just as nicely as possible. She feels well and strong and is as hungry as a bear. She can eat solid food now and plenty of it. She had no bad spells after the baby was born and only complains that she has to stay in bed so long. She hasn’t even had a headache and says she believes she could get up and scrub and do her housework the same as always. She said today that if she was only in the South now, she would make hot biscuits and honey and fried chicken and even persimmon pudding fly. She thinks she would enjoy almost everything she had down there now. Her mother said she never saw anybody get along so well. She had a hard time of it at the birth, but for all that she did not get very weak and has been remarkably strong all along. And as for the boy, Carolus De Long, he is the most wonderful baby you ever saw. Everybody says he looks like his father, but he is a decided improvement over him. I guess there never was a stronger or healthier looking little baby and he is as bright as he can be. Even before he was washed he opened his eyes and looked all around and he notices everything. And he is as good as the day is long. He cries some, of course, but this is at night; hence the statement of the above sentence is perfectly accurate.

Last night he was good also at night. He has the clarest clearest skin of any new born baby I even saw. And while he is almost devoid of hair, what little he has which is all on his head is as fine and glossy as silk. It is the unanimous opinion of all his relatives that he is the handsomest baby they ever saw. His grandmother is down here nearly all of the time. She says she just can’t stay away from him and his aunt Meda (Mrs. Gunn) is just wild over him and wants to hold him all of the time. “Minnie” his great grandmother is almost equally fond of him; so I guess he will not want for attention. We have had a lot of visitors and all pronounce him a fine baby. He weighed 10 lbs. when he was born but is not an overly fat baby, but simply large and long. He gets that from de Long part of him. I expect to baptize him in the Church on the first Sunday in July. Wish you could be here to stand sponsor for him. I guess though I will have to take some of our leading members. We received Mabel’s pretty little booklet of Baby Records this evening and Bonnie was “mighty” well pleased with it. She thinks it is just too cute for anything and in the words of an old Dutch lady of New Germany now departed, says “I tank you a tousand times: I always tought you were good lookin.” We are having real hot weather now, and it is awfully dry. If it doesn’t soon rain the hay crop will be almost a dismal failure. Other things are not suffering so much yet. My garden is progressing nicely. The beans, lettuce, cucumber etc are doing fine and the nasturtiums which I planted in front of the house are growing nicely. My cantaloupes were slow in making a start, but they are nearly all up now and look promising. I think the ground was too cold yet when they were put out for them to come up sooner. They will probably do well now from this out.

I have had an unusual run of hard work for the last couple of weeks and have had little time to prepare for Synod and am feeling shaky about preaching Sunday. Two weeks ago, from Saturday evening until Monday night, I rode almost 80 miles on horseback and preached five

times. On Monday alone I rode nearly fifty miles or quite so to attend a funeral. Then on Thursday night the night the baby was born I was up all night, and Saturday evening I was sent for to come over to Newburn on a sick visit and counting that trip and the long trip Sunday and the return home on Monday I rode again about 60 miles and preached four times. It was a funeral this time again that gave me the extra service, and it was a bad case too – that of a girl, 14 years 8 mons and 24 days old, who had been seduced and died from the effects of confinement. I preached a strong and stirring sermon that they will probably not forget very soon for the text, “The wages of sin is death.” It was an awful case and I used it for all it was worth to warn the living. It probably did not meet with the approval of the family, but I trust that it will have the good effect that was intended and I am sure that all right thinking people in the community will say that it was just what was needed. I got back home Monday evening and have been here since, but was up till to-day I did not feel like studying and didn’t have opportunity to do very much today. If they let me out of the secretaryship this time according to my desire to be released, I may have a little opportunity to do more studying in Lunenburg for Sunday morning’s service. I expect we will have a busy time at Synod, perhaps a hot time over the Mahone Bay parish’s obstreperousness and some other things. But I must close. With love to you and your family from me and my family, I am 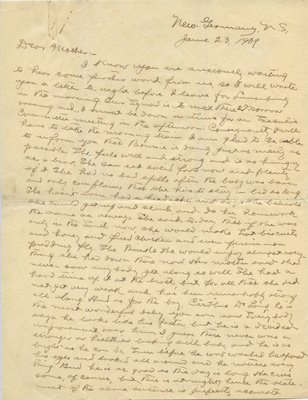