As Herbert is down in the city to church tonight and I am here alone, I will write you at least a short letter to let you know how we are coming on. To-day has been one of the warmest days of the season, a real summer day. Some of the boys said the thermometer stood 94 in the shade, but I hardly think it was quite so hot as that, tho undoubtedly there is strong evidence that the summer season is right at hand. The leaves are bright and green,the flowers are in bloom and the air is soft and balmy – all combining to make one feel good at this season of the year. This morning Mr. Glenn and I went down into the city and attended church at one of the finest Episcopal churches in Phila. – a fine old basilica with exquisite carving

and architectural work of surpassing beauty. The service was of the “High Church” order and was splendidly rendered but it was so long as to be quite tiresome despite its excellence. The service itself lasted one hour and 20 min. before the sermon began and extended over 2 hours in all. When I sit through a siege like that I am always glad that our church in this as in other things employs a wise moderation. There is such a thing as too much of a good thing, which becomes a weariness to the flesh. The open cars are on, however and we enjoyed the ride home immensley and as dinner was a little I had more of an appetite than usual and ate it with more relish. Since I’ve been taking some patent medicine cure-all Paine’s Celery Compound I’ve been feeling better than usual for some time. I think I will get along O.K. from now on. I suppose you received the invitation Herbert sent you. The commencement is now not far off any more and we are expecting it to be a swell affair

worthy of the great occasion it commemorates. Herbert’s trouble about his speech is happily over and he has it entirely written – a very good speech I would say if I didn’t dislike to brag. But he was in a very bad way and worked like a grave-stone until he got it done. His objection, if it hadn’t been so serious would have been real funny, but I knew all along that he wouldn’t go without his little speech. Walter Rowe left last Wednesday and I suppose you have seen him by this time and learned all the news. If you haven’t personally, perhaps Pearl has. Walter was out to see us before leaving. I am glad he did so well. He is certainly a fine fellow. I suppose he is enjoying himself hugely now after being away for so long a time. I wish I could also be at home a while with you all but as I have been fortunate enough to receive the position of which I have written to you several times recently it is not likely that I will get there for a good while to come. I received a letter from Mr. [Gill?] the other day in which he

offered me $12.00 a week and as I can get board and room for $5, it will leave me a balance of a $1 as day including Sunday – too good a chance I think to let slip. So I will have to forego the pleasure of a trip home this summer. I think the situation will be a very pleasant one and also very healthy as it is on the coast at a famous summer resort and the man I’m to work for has the reputation of being a fine man, good Lutheran and perfect gentleman. I am deeply indebted to Dr. Jacobs for his interest in my behalf as it was solely through his influence that I succeeded in getting the position. I will do my best to hold it down through the entire summer and if I succeed, it will be quite a lift to me in the way of lightening my financial burdens. Find out from Walter if you can whether Mr. Beck get the position he was looking after, also whether Mr. Bowers got his place as st.[street] car conductor. I want to look them up and have them to come out if they are still in the city and as we are busy with examinations etc., I haven’t time to go around and see about these

things. I passed one of my examinations last week – Symbolics under Dr. Jacobs and came out O.K., don’t think I had anything wrong. I hope I will be equally successful with the rest. I don’t fear them much, but still one is a little shaky till they come off you know. Dr. Jacobs told me the other day that he received a letter from Benj. [?], saying that he would be up for sure next fall. So I will have another good Southerner as a room-mate for which I am devoutly thankful. I think Ben will do fine here. Herbert directed me to say that Bikle and Leupold should send him $3.00 and he would bring a pair of bicycle tires when he came. As to Aunt Claudia’s wheel for Willie and Frank, he saw a man the other day who said he thought he could get him a good wheel at a reasonable rate. He also said if you wanted any crush [?] at 12 1/2₵ to send some money and he would get them. I surprised him the other day by riding his wheel around the campus several times after only a few attempts at mounting, tho I haven’t been on it since. Did you receive the Kodak

picture or pictures I sent? I don’t think you said anything about them when you wrote

before. The seniors had their class picture taken one day last week. The proof came out

the other day and from all appearances it is going to be a fine picture. We received quite

nice invitation the other day from cousin Mildred Rowe to the [?] college

commencement. I suppose the Senior college commencement is on this week and that

as usual you are having plenty of company to keep you busy and make things lively.

Remember me to any of the kinsfolk and friends who may inquire. Let me hear from you

soon. With love to you all and best wishes 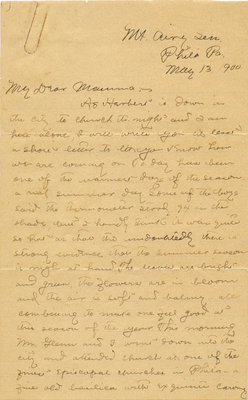