Your very interesting and encouraging letter was received several days ago and read with very great pleasure. I didn’t know what had turned up that I didn’t hear from you sooner but under the circumstances I suppose I can pardon the delay. But I must say that you must be a busy crowd if some of you can’t find time to write once a week. I always find Sunday a good day of leisure, tho’ I suppose I go to church as often as any of you. I think I shall go to hear Rev. Dressel again today. I haven’t been there for a couple months. Last Sunday night I heard a sermon in one of the most aristocratic Presbyterian churches here. It was on the subject of the Flood and

was extremely interesting but far from orthodox. The preacher made it a comparatively small affair and due entirely to natural causes. It is wonderful to see how much unbelief there is even in the churches themselves. The tendency to rationalize, to explain away the incomprehensible and to make everything subject to science so-called was probably never greater that at the present day. I think I told you some time ago of the eloquent Methodist Irvine whom I heard preach on the subject of creation and who said in his sermon that he wasn’t prepared to stand up for everything in Genesis. I think however that this tendency has taken less hold upon the Lutheran church than upon any other in the world and that in the main she still is old fashioned enough to stick to the old paths and accept Bible truth without any questioning or appeals to rationalistic science. The experimental sciences, such as chemistry, physics, zoology and biology are great breeders of skepticism. Geology too is one of the most productive. I heard several

lectures on Biology by a distinguished scientist some time ago, in which he held that it was possible that life would yet be found to be the product of the physical basis and that the discovery by scientists of the doctrine of natural selection had greatly weakened the argument in Natural Theology based on design. Still he was among the comparatively conservative classes of his kind. Dr. Haupt of this university is getting out a new translation of the Bible. He gave us a lecture on it in the Philological Association of last week. It is to be polychrome, i.e. multi-colored the different colors indicating the various sources from which the different parts come. He makes great claims for it. He says it is based on connected texts and that it will render many things clear that are now dark and besides will be free from Hebraisms and be put into good, common, ordinary everyday English. I rather think, however, that it will be on the higher critic order than which there is nothing more destructive. We had a lecture last night in the University by one of the Professors of Harvard University on Home Life at Pompeii. It was illustrated by magic lantern pictures and was very interesting and instructive.

It was wonderful to see to what a stage of civilisation and luxuriousness those old Romans had arrived so many centuries ago. It makes one feel that there is really ‘nothing new under the sun’, not even modern civilisation. This evening at 4 o’clock, there is a meeting for students at the University under the auspices of the Y.M.C.A. at which Pres. Gilman, Dr. Kelly of the Med Dept. and several other notables will speak. I think I shall attend if I can make it convenient. I finished my German under Dr. Baker Friday and will have our last in Goethe under Dr. Wood Tuesday. He didn’t quite finish up this last week but I will not come up any more. This will be quite a relief. I will then have only [Schiller?] under him and will have more time for my extra work in the seminaries. I am getting along very slow, it seems to me, on my Latin paper. It seems to me I never will see daylight on it. It is a little discouraging – the slow progress, but if I have enough time maybe I’ll make something out of it sometime or other, I am taking it somewhat easier than I did. Dr. Kirby Smith tho’ is such a

fine man that I want to do the best I can under him. Dr. Wood hasn’t given me any subject yet and I’ve stopped asking him. I got ashamed of going to him so much about it; besides I don’t think they can require a paper on Second Minor any how. I don’t want one now because I’ve got to put my time for the next month on my Latin. It seems to be such a hard time for Wood to find me a subject. He ought to consider it a favor to be relieved of so arduous a job. I haven’t done anything in the way of looking out for work since I wrote you last. I would like very much to come back here next year. Of course the longer a man goes here the better his chances are for securing something worth- while. If I could get an honorary scholarship next year, that would pay my tuition and $75 in money. There are, however, only 6 for N.C. and I don’t know whether I could get one of them or not. I think I shall make application. If I could get that and also get a school through the summer I wouldn’t come out so very badly behind. But I hardly know what to do about it. I understand Herbert is going to teach the Craig School again next summer Wilson has got mine and is

running a 10 mo. school there now. I like that place better than any I have ever had anything to do with. We have been having a little colder weather lately. It snowed the early part of last week but it didn’t lie over a day. We have had some showers of snow since but not enough to make a show on the ground. I like this sort of weather first rate. I am glad to know that the children have become reconciled to going to the graded school. It will be quite a savings. Pearl is not going there too, is she? Bikle is a captain. Tell him I said he must come up here some-time, I mean, to enter Hopkins. Remember me to Mrs. Olo Stroup. I think it was right well that you took her in under the circumstances. Every little helps. I hope that you will all have a pleasant time at conference; but I suppose it is over by this time. If Mr. Miles Hoffman is still there when this letter arrives tell him I hope he will have his boys ready for Roanoke next year. I tried to get him to send them there last year but his wife wouldn’t let him. I am not getting S. N.’s papers. Tell him I said for him to send it to me whenever election news gets to

coming in at any rate if not before. I hope that Mrs. [Sigman?] is getting well by this time. Has Mrs. [?] gotten well yet? I hope that you all will succeed in stopping the [?] R.R. from spoiling our front yard. If that is not possible we ought to have bif damages. Well I

could write more but it is time for me to start to church, so I will close for this time. With love to you all, I am 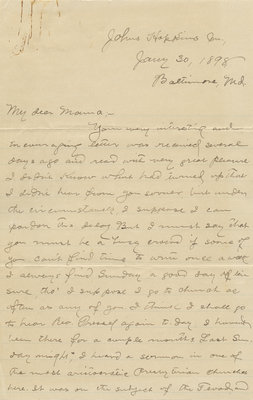