The H. W. Cooey Machine & Gear company, established in Toronto in 1903, was named for its founder, a specialist in machinery and tool design.
During the First World War the company achieved an enviable reputa- tion for high quality design and production through its contribution to the war effort.
Shortly after the war, Cooey designed the now world famous Cooey Single Shot .22 Rifle - the rifle that won the Certificate of Honour in 1924 at the Wembley Exhibition in London, England. The rapid acceptance of Cooey rifles caused the company to seek larger manu- facturing facilities and, in 1929, the Cooey Machine and Arms Company moved into its new quarters, a four-storey plant on King Street West in Cobourg. It was here, in 1932, that the Cooey Model 60 Repeater was introduced - another .22 which gained immediate acceptance by Canadian sportsmen.
During the Second World War the company once again devoted its plant and efforts to the production of war materials, including arms parts and training rifles. Directly after the war, the company resumed full production of sporting arms and, in 1948, introduced the now famous Model 84 Single Barrel Shotgun in all popular gauges. Now called the Model 840, this outstanding firearm has been produced for over 20 years and has enjoyed continued popularity in Canada and throughout the world.
In 1951, the company was sold to the Olin Corporation and was placed under the supervision of the Winchester-Western Division of Olin, In September, 1962, the company name was changed to Winchester-Western (Canada) Limited.
A new ammunition plant was built in 1962 and eight years later, in February of 1970, Winchester Canada vacated the old King Street plant and moved into its new offices and arms plant on Brook Road North.
Winchester Canada presently employs over two hundred people and produces the entire line of Cooey rimfire rifles and shotguns in the Cobourg plant. The complete Winchester product line is sold in Canada through the Cobourg operation, some being assembled in the plant and other models being imported directly from the United States. The entire line of Winchester Ammunition is manufactured in Cobourg making Winchester the only completely integrated arras and ammunition manufacturer in Canada.

We sincerely regret the untimely passing of the President and General Manager of Winchester-Canada, Jack Feldhaus, who was a conscientious and highly respected member of the Board of Directors of the Cobourg Chamber of Commerce 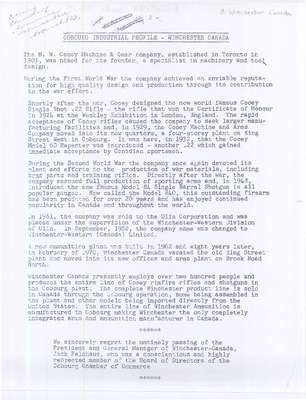