This is Winchester Canada's big week in Cobourg. The company and its 265 employees have just moved into their new 86,000 sq. ft. plant on Brook Road North, and on Thursday official dedication ceremonies will be held.

This Saturday - June 13 - citizens of Cobourg and district are invited to visit the new plant and see how world-renown Winchester and Cooey guns are made.

Employees were the first to open the celebrations with a big family tour a few weeks ago.

On Thursday, with, Cobourg resident and Canadian president and general manager John E. Feldhaus as host, the new plant will be dedicated at 2, p.m.

The company has recently moved from its former plant in the town's . west end, where it had been located since coming to Cobourg in 1929.

Winchester Canada Limited sells a full range of Winchester guns im- ported from the U.S. as well as those made in Cobourg. There is also an ammunition plant at Cobourg.

Beginning in Toronto as the H.W. Cooey Machine & Arms Co. Limited, in 1903, its founder was a machinery specialist. During World War I, the company produced small arms parts and other machinery, always conscious of quality and good design.

Just after the war Mr. Cooey himself designed the famous Cooey 22 caliber rifle which soon became well recognized across Canada as well as internationally. By 1929, there had been several expansions in Toronto, and Mr. Cooey bought a vacant plant in Cobourg and the company came here.

During World War II of course, war production was vitally important to the Cooey plant, and out came parts for guns as well as training rifles.

In 1961, when Mr. Cooey died the company was sold to the then Olin Mathieson Chemical Corp., under the Win- Chester-Western division. Several new lines were brought into company activity, a large ex- pansion of plant and office space undertaken, and employment began to jump from under 100 up to today's 265.

Cobourg's Winchester plant is headed by an energetic management team with Canadian president and general manager John E. Feldhaus at its head.

Mr. Feldhaus joined Winchester Canada in October, 1968 after 18 years with the U.S. parent company. He is a graduate of Westminster College, Fulton, Mo., and has an MBA from St. Louis University, St. Louis, Mo.

In 1950, he became a management trainee with the U.S. company, and moved successively and successfully through positions as a business research analyst, marketing assistant, assistant to division general manager, to marketing research manager, assistant director of sales to a 1967 posting as director of market planning.

Just under two years ago, he came to Cobourg to head Canadian operations. In the community, he is a director of the Chamber of Commerce, and in- volved in church and Boy Scout activities.

Many of the other executives are also well . known.

Charlie Thompson, director of manufac- turing, joined the com- pany early in 1967, and is a former materials manager at Canadian Trailmobile and project manager at Canadian Westinghouse. He is a professional engineer, graduate of Upper Canada College and University of Toronto.

Frank Moore, director of marketing, has been with the company since 1962 He is in charge of marketing, sales and distribution of Win- chester-Cooey firearms and Winchester am- munition throughout Canada. Under his direction also come product service, ad- vertising and public relations, field force, customer service, market planning and the Quebec branch.

Previously, he was a sporting goods manager in Vancouver, a merchandise manager for sporting goods in Winnipeg, then a Winchester field representative for seven years before becoming director or marketing last year.

Jim Morse, controller, has been two years at Winchester. He is in charge of accounting, analysis, office administration. Previously he was a financial analyst with Massey Ferguson and Ford of Canada. He is a graduate of University of Toronto with a BA and MBA.

George Cook, manager of technical services, ahs been four years with the company, and is responsible for quality control and new product design and development. He was a toolmaker in the U.K., a gun fitter with the British armed forces, and a toolroom foreman in guided missile division of English Electric Company in the U.K.

Harold Nelson, in- dustrial relations manager, since 1966 is known throughout the Cobourg community, and is very much involved in a number of community ventures, including the IAPA, Cancer Society and Chamber of Com- merce. He is responsible for the usual duties of personnel and labor relations, but also for a special duty of "com- munity relations". Previously he was with Canadian Westinghouse in personnel work.

Bill Long, manager, ammunition manufacturing, has been with Winchester since 1962.

He was in the Canadian armed forces from 1943 to 1959, and was then ammunition plant superintendent for Gevelot. He is commanding officer of the local Air Cadet squadron and a member of the education branch of the RCAF Reserve.

Total cost of the new Winchester plant is well over $2 million. When work began on the 50-acre site last summer, costs were estimated at $2,198,000.

Ontario Development Corp,, a provincial government agency, granted a $250,000 forgivable loan to help finance the project; The loan does not have to be repaid, provided the company meets certain conditions over a six-year period. It was provided under the province's "Equalization of In- dustrial Opportunity Program".

CONGRATULATIONS
TO WINCHESTER
CANADA ON THEIR
PROGRESS AND
DEVELOPMENT
LOOKING FORWARD,
WE TAKE PLEASURE AND PRIDE
IN JOINGIN WITH ALL
OF YOU IN THIE WORK OF BUILDING
FOR THE FUTURE
RONER
CONSTRUCTION
LIMITED
GENERAL CONTRACTOR
304 DIVISION STREET COBOURG

A
BRIGHT
FUTURE
We are proud to share in this effort…. And to serve the individual, the family and the business
“DUTCH OVEN”
Bakery-Coffee Shop Industrial Caterers
Cobourg
Our Reputation is Your Guarantee 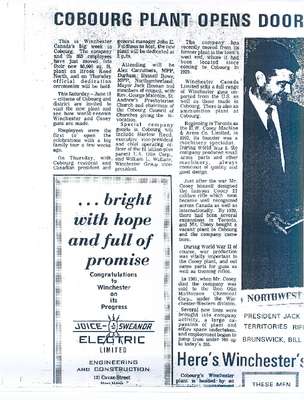