THIS INDENTURE made the fifteenth day of September in the year of our Lord one thousand eight hundred and twenty seven Between Joseph Paul White of the Township of Haldimand in the County of Northumberland in the Newcastle District in the province of Upper Canada, yeoman of the first part, and Joshua Rufs of the same Haldimand, yeoman, of the second part, WITNESSETH, that the said Joseph Paul White for and in consideration of the sum of Fifty pounds of the Lawful Money of the Province of Upper Canada, to him in hand paid b the said Joshua Rufs the Receipt whereof is hereby acknowledged , hath given, granted, bargained, sold, assigned, released, transferred, conveyed and confirmed, and by these presets doth give, grant, bargain, sell, assign, release, transfer, convey and confirm unto the said Joshua Rufs his Heirs and assigns, all that certain tract of parcel of Land situated in the township of Haldimand, in the county of Northumberland in the Newcastle district and province of Upper Canada, being the south part of the east half of lot number twenty four in the broker concession B of Haldimand aforesaid, containing by admeasuremnet thirty acres of land to the same more or less, to which said tract is butted and bounded or may be otherwise know as follows, that is to say, commencing in front of said Concession on the lake shore at the south east angle of said lot number twenty four – thence north sixteen degrees west thirty chains—thence south seventy four degrees west ten chains more or less to the center of said lot—thence south sixteen degrees east thirty chains more or less to Lake Ontario—thence north seventy four degrees east then chains more or less to the place of beginning.

In Testimony whereof, the said parties have hereunto set their hands and seals the day and year first mentioned above
Signed, Sealed, and Delivered
IN PRESENCE OF
(?)
Joseph P. White
Joshua Rufs. 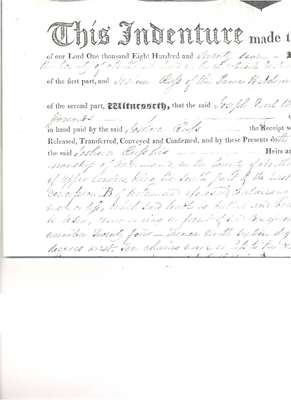