Know all men by these (?) that William Weller of the Town of Cobourg in the County of Northumberland and Province of Canada, Esquire in consideration of one dollar to me in hand paid by Richard Weller of (?) in the county of (?) in the State of Vermont one of the United States of America, Farmer, the receipt whereby paid herby acknowledge have granted bargained sold released and assigned and do herby grant bargain sell release assign and convey unto the said Richard Weller his heirs and assigns all the right title and interest whatever and however of me the said William Weller of in to and out of all the lands Tenements (?) and premises of which my late father David Weller did seized possessed or entitled to as heir or as one of the heirs of the John Weller in his lifetime of (?) aforesaid Farmer, which said lands tenements (?) and premises are situate in (?) aforesaid and contains ten acres of land more or less together with the (?) thereto belonging.

To have and to hold the (?) unto the said Richard his heirs and assigns forever.
In witness whereof I have hereunto put my hand and seal this thirteenth day of December on thousand eight hundred and fifty nine at Cobourg
Signed, sealed and delivers in presence of (?)
William Weller

Canada
Town of Cobourg to Wit: Be it remembered that on this Thirteenth day of December one thousand eight hundred and fifty nine at the Town of Cobourg in the County of Northumberland in the Province of Canada before me the undersigned notary Public in and for that of the said Province formerly Upper Canada by Royal authority duly appointed. Personally appeared William Weller of Cobourg aforesaid Esquire. (?) and in the Presence of Arthur Radcliff Boswell and Thomas Moore Weller both of Cobourg aforesaid Gentlemen did duly sign seal execute and as his act and deed deliver the (?) deed (?)

In Testimony whereof I have hereunto set my hand and affixed seal (?) 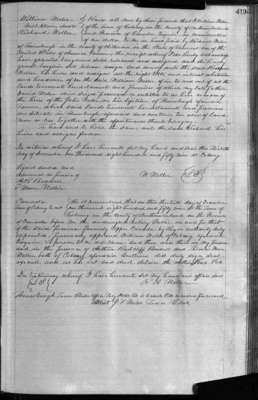