Quit Claim Deed
I certify that the within Instrument is duly Entered and Registered in the Registry Office for the West Riding of the County of Northumberland, in Book h for the Township of Haldimand at 10:10 o’clock a.m. of the 14 day of October A.D. 1876
Number 1230

Sworn before me at the Town of Cobourg in the County of Northumberland this 16 day of October A.D. 1876
Wm. Congal

THIS INDENTURE made (in duplicate) the Fourteenth day of October in the year of our Lord one thousand eight hundred and seventy six
BETWEEN John Linton of the Township of Haldimand in the Country of Northumberland, yeoman, of the first part
-and-
John W. Kerr of the Town of Cobourg in said County , Esquire, of the second part

Witnesseth, that the said party fo the First part for and in consideration of Five hundred dollars of lawful money of Canada to him in hand paid by the said party of the second part at or before the sealing and delivery of these presents (the receipt whereof is herby acknowledged) Hath granted released and quitted claim and by these presents Doth grant release and QUIT CLAIM unto the said party of the second part his heirs and assigns for ever. All the estate right title interest claim and demand whatsoever both at law and in equity of otherwise howsoever and whether in possession or expectancy of him the said party of the first part of in to or out of all and singular that certain parcel or tract of land and premises situate lying and being in the Township of Haldimand in the County of Northumberland Province of Ontario

Together with the appurtenances thereunto belongings or appertaining to have and to hold the aforesaid Lands and premises with all and singular the appurtenances thereto belonging or appertaining unto and to the use of the said party of the second part his heirs and assigns for Ever: subject nevertheless to the reservations limitations provisos and conditions expressed in the original Grant thereof from the crown

In Witness whereof the said parties hereto have hereunto set their hands and seals.
Signed, Sealed and Delivered in
The presence of
Having been first read over and explained
Wm. Congal
John Linton

Received on the date hereof from the said party of the second part the sum of Five hundred dollars the consideration within mentioned.
Witness
Wm. Congal
John Linton

Being compared of the North Half of Lot Number Nineteen in the Ninth Concession of the Township of Haldimand in the County of Northumberland. Containing by admeasurement one hundred acres be the same more or less. 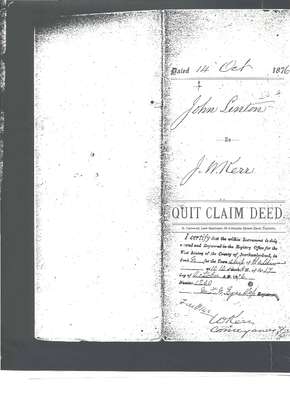