This is Schedule “B” referred to in the affidavit of Value and Relationships of John Waldie, Sworn to on the 15th day of May A.D. 1905
Wm. Kerr A Commissioner, &c.

This is the Last Will and Testament of Mrs. Mary Waldie of Cobourg in the County of Northumberland and Province of Ontario Canada and made this 4th day of Sept. in the year of our Lord one thousand eight hundred and eighty six.

I Revoke all former Wills or other Testamentary Dispositions by me at any time heretofore made and declare this only to be and contain my last Will and Testament.
I Direct all my just debts funeral and Testamentary expenses to be paid and satisfied by my Executors hereinafter named as soon as conveniently may be after my decease.

I give, devise and bequeath all my Real and Personal Estate of which I may die possessed in the manner following, that is to say:== that the Real Estate on King St. Cobourg (as named and described in the deed given by Lewis Moffat) and also all personal property and money may be used to provide a home for John and my daughters Mary Ann and Florence. (?).

As long as either or both of the girls remain single, they are to have all the privileges of the home, and no division of the property shall be made.

If either of the girls above named gets married she can take only her own personal effects from the estate.

As long as John lives there shall be no division of the property, and he shall have full control of the Business.

At his death there shall be no division of the property until the two girls above named, by either married or dead. At the death of John (my husband) and marriage or death of the two girls; the following division shall be made:

All the other Real Estate Chattels personal property and money shall be divided equally among Archibald, Thomas Alex, William, Mary Ann and Florence (or their husbands) and that the estate be kept in the Waldie name if possible.

But if any of the children do not act in a dutiful or becoming manner and are profligate, reckless or unsteady, they shall receive no part of the property or effects.

The executors here-after named shall have the power to decide whether any of the children so act (being guided by their actions together with what information they can receive from the rest of the family and others).

And if any paid to receive their share it shall be divide amongst the others. Jemina being excepted.

If John (my husband) should marry after my decease he shall have no power to change the will but it shall be divided among the children. (That is the Real Estate).

All my personal affects such as (clothing & jewelry) shall be divided between the two girls, Florence and Mary Ann. Then all other things divided as before mentioned.

If there be any (widows or widowers) not my children connected to the family. Neither they nor their heirs shall cause the property to be sold to make a division of the same. Neither shall they be entitled to any part unless the remaining children are disposed to grant it. And if they do not grant to such parties a division it shall be divided equal among the remaining children named.

And I nominate and appoint Mr. E.D. McNaughton. Alex (?) Sr. and Wm. Hargroft Sr. to be Executors of this my last Will and Testament.

In Witness wherof I have hereunto set my hand the day and year first above written.

Signed published and delared by the said Mary Waldie. The Testators as and for her last Will and Testament in the presence of us who both present together at the same time in her presence at her request and in the presence of each other have herunto subscribed our names as witnesses. D, Rooney, (?) Mary Waldie

A
We herby identify the written as the last Will and Testament of the late Mary Waldie deceased referred to In the amended Petition and affidavits
John Waldie
Party (?) for administrator with Will (?) Wm. Kerr, J.W. Kerr Solicitor Serving Affidavits
In the Surrogate Court of the United Counties of Northumberland and Durham.
In the Estate of Mary Waldie, deceased.
I, John Waldie, of the Town of Cobourg, in the County of Northumberland, Retired Barker, make oath and say:-
1- That I am the lawful husband of the said deceased.

2- That my daughter Florence named in the Will of my said deceased wife married one J.H. Weaver of the City of Buffalo, Polisher, and had by him two children only, one named William Weaver who died when about 5-years of age and the other Thomas Alexander Weaver who is still alive and residing with his said father in Buffalo and is now about 12 years of age; the said Thomas Alexander Weaver is thus the only child and heir-at-law of my said deceased daughter Florence who died on the 23rd day of December 1897.

3- That my son Archibald Waldie also named in said Will died on January 26th 1901 unmarried.

4- That my son Thomas Alexander Waldie also named in said Will died on December 19th 1887 leaving a widow but no children him surviving . His widow is now married again.

5- That my son William Waldie also named in said will died on May 2nd 1899 leaving a widow but no children him survivinhg. His widow is also married again.

6- That the real estate mentioned in the Will of said deceased wife was not owned by her at her death but by myself, and the only estate owned by my said wife, as far as I know or can ascertain, is that set forth in the (?) filed on this application.

7- That I am advised that, owning to the death of my said daughter Florence and said Archibald, Thomas and William, the only persons interested in the estate of my said deceased wife, under the terms of her Will, are my daughters, Mary ann Soule, and Jemina Collins, and my grandchild Thomas a. Weaver aforesaid and myself.

Sworn before me at the Town of Cobourg, in the County of Northumberland, this 15th day of May A.D. 1905 Wm. Kerr (?) John Waldie
This addifavit is filed on behalf of the appoint
(?)

IN THE SURROGATE COURT OF THE United COUNTIES of Northumberland and Durham
In The Estate of
Mary Waldie, DECEASED

INVENTORY AND VALUATION of the Property of the said deceased.

I, John Waldie, of the Town of Cobourg, in the County of Northumberland, Retired Baker, make oath and say that I am the husband of the said deceased, and that the above is, to the best of my knowledge, information and belief, a true inventory and valuation of the whole property of the said deceased at the time of her death, as far as I can at present ascertain. SWORN before mea at the Town of Cobourg, in the County of Northumerland day this 15th day of May A.D., 1905 before me.
Wm. Kerr (?)
John Walide
This affidavit is filed on behalf of the applicant (?) his solicitors.


In the Surrogate Court of the United Counties of Northumberland and Durham.

In the Estate of Mary Waldie, deceased. 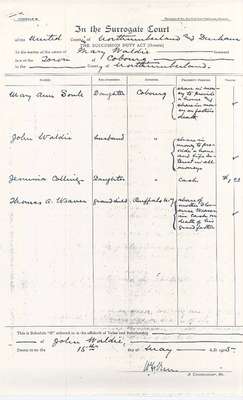