Special to the Cobourg Daily Star
Thursday, May 1, 2003

On Saturday, April 26, 2003, the Warkworth-Percy Historical Society held an open house at the Percy Heritage Centre, located in the old Warkworth Library. About 50 people gathered for the occasion on a beautiful sunny day. The gathering included Society members, as well as government representatives from the federal, provincial and municipal levels. A programme was provided to guests, including the inscription on the plaque. There was a dedication of the Godolphin Flag Stop (circa 1916), named by my own maternal grandfather, Peter Fairman (1874-1953).
The Warkworth, Hastings, Campbellford area is now called Trent Hills, replacing the old Percy and Seymour townships. This is heritage country, an old part of Ontario; Percy Township was surveyed by 1799-1800. Peter Fairman resided at Lot 22, Concession 9, Percy Twp. The Fairmans have lived there since 1878. If one enjoys a sense of history and appreciates Ontario heritage, it doesn't get much better than the Trent Hills area. Located in the northeast portion of Northumberland County amidst rolling hills and the beautiful scenic waterways of the Trent Waterway system, farmland abounds in the area.
I have enlarged the small photo from the programme, of the Godolphin flag station, and included a photo of Eric Summers, a career railroad man, who unveiled the plaque. I felt it an honour to pay homage to my grandfather, Peter Fairman, and I wish to congratulate the Historical Society on its placing of this historical plaque, and on its future plans to keep our past history alive.

Yours truly,
Bruce Morrison
Cobourg, ON

Inscription on the Godolphin plaque:

Built in 1916, Godolphin flag station was named after British Treasurer Earl Sydney Godolphin by Councillor Peter Fairman. It was one of seven flag stations on the Canadian National Railway running between Belleville and Peterborough. Flag stations were built to serve the smaller communities along the railway line that did not have station stops. They were used by travellers and farmers shipping produce and milk cans to market. Typically, people waiting for the train would stand inside the wooden, 3- metre-high, 1 1/2-metre square cupola-topped flag station structure. As the train approached, they would raise a green and white flag to signal the approaching train to stop. The Godolphin flag station closed around 1953.
Erected in 2002 by Warkworth Percy Historical Society with the support of J.D. Kelly Book Fund, interested citizens and the Ontario Heritage Foundation. 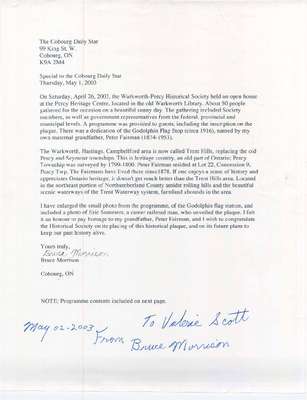