Full Text
James Walder….his collection is on display at the Cobourg library.

Walder’s shot for the Golden Hind was taken in one of his favorite sports for photographing ships, the Welland Canal.

Walder’s first love was trains, particularly the steam engines which disappeared at the end of the 1950’s. His father was an engineer for the CPR until 1959. Now collectors interested in the steam era attempt to gather photos of each engine.

Two years after his death the photographs of James Walder, Cobourg teacher and amateur photographer, are a lasting record of his lively interest in trains, boats and planes.

As years pass, the black and white photos of the trains and boats of the steam era will-assume ad- ditional value as a record of leisurely and attractive means of transportation no longer in use.

The steam trains, which were one of Walder's earliest subjects, were phased out by the end of the 1950s and the steam ships, which are still in use on the Great Lakes, are becoming scarcer.

Some of the photos of steam engines from the collection of his cousin John Riddell are on display at the Cobourg Library for a short period.

The photos of steam ships are now owned by the Marine Museum of Upper Canada in Toronto. A further collection of color slides of planes is at the National Archives in Ottawa.

Alan Howard, curator of the Marine Museum, says photos from the steam era are already in demand among collectors who attempt to gather photos of each train engine or steam laker used in Ontario.

The museum's collection of black and white photos of steam ships taken by Walder in the 1960s and early 70s will appreciate as the steamers disappear, he says, There, are many amateur photographers still taking photos on transportation themes in Ontario and they exchange negatives to improve their own collections, says Howard.

Private collectors are springing up everywhere; says Howard, and they are also on the lookout for such material increasing its value as pictures of ships and trains already scrapped become less available.

The photos donated to the Marine Museum after James Walder's death in 1978 are not yet on display to the public.

Howard says they may possibly be used in later displays on par- ticular subjects but the museum does not have the staff or resources to open its archives to the public.

The color slides of airplanes Walder took in the 60s and 70s are also unavailable to the public now. They were sent to the National Photo Collection of the National Archives and must be catalogued first.

Walder took photos of sports activities and other special events at CDCI East where he was in the guidance department till his death in 1978.

His photography was an in- dividual hobby which he did not share with many people, according to his friend; Ted Rafuse, also a teacher at CDCT East. Walder was a modest man, says Rafuse, and few people knew the extent of his collection of photos on the transportation theme.

Walder was born May 4, 1926, in Hamilton, Ont., and went to Runnymede collegiate in Toronto.

He graduated with a B.A. from Victoria College at the University of Toronto in 1952 and began teaching math, history and geography at the West Collegiate. He joined the staff at the East Collegiate later. Walder switched to guidance in the 1960s after studying for a specialist's cer- tificate in guidance.

Walder had a continuing in- volvement with athletics, coaching and officiating at track and field events as well as taking interest in the future careers of his students, says Rafuse.

He never married, but had bought a house on Cottesmore Ave. about six months before his death of a heart attack in Nov. 1978.

Walder used a makeshift darkroom in the bathroom of his apartment on Queen St. and a darkroom at his father's home in Toronto to develop many of his prints.

Walder's father worked for CPR from 1918 to 1959 and had worked his way up to become an engineer. This was the source of Walder's early interest in steam engines.

From the beginning of his hobby in 1945, Walder haunted the railway yards at Bayview Junc- tion, Lambton, Lorne Park (Oak- ville), Palmerston, Orangeville and Cobourg to capture the splendid iron engines on film.

His most active period was 1957 to 1959 when the steam engines were being phased out by CPR. He made two trips to Western Canada during this time.

Walder became interested in model railways a few years before his death and his photos helped him to study the trains in miniature. He had collected eight or nine models, including one of the last steam engine driven by his father, by 1978, according to Ted Rafuse.

When the steam engine disap- peared Walder increased his in- terest in ships, and many photos taken from the early 1960s to the time of his death are of the Great Lakes freighters which docked at Sault Ste. Marie and in the Welland Canal.

These luxurious white ships were the only three remaining passenger steamers on the Great Lakes.

The aviation photos were un- dertaken later in the 60s to com- plement the other forms of tran- sportation. Walder used color slides, rather than black and white prints, for the airplanes.

Walder worked with a Zeiss in the early years and used 616 and 120 sized cameras. In the 1950s he Bought an early 35mm Pentax and replaced it later with another Pentax.

Some of his photos have been Published. Trains an railroad Magazine (now Railfan and Railroad) took several photos in The early 1950s.

the Bruce by Beaumont and Running Late, another record of steam trains on the Bruce penin- sula, have photos by James Walder.

Locomotive Quarterly has a pictorial essay on the CPR D-10 class using Walder's photos in the Fall 1979 issue. 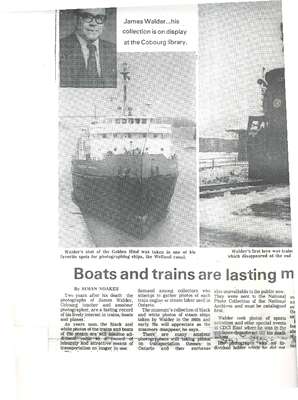