Full Text
LIONS, a
MUMMY,
and a
MYSTERY
Tales from our Cobourg years
By Birgitte Nielsen Worrall

GO TO THE CORNER OF UNIVERSITY AND College--no, not in Toronto, but east- ward down the lake, in Cobourg. Face north toward the rise of land across the road and the original Victoria University campus. What you will see is the birth- place of Victoria College--a stately three-storey white build- ing in the Greek Revival style, with soaring Doric columns, topped off by an elongated cupola. What you will not see, beyond the pine trees in the empty field to the east, is Faraday Hall, a fanciful creation in grey limestone and red brick, with tall striped chimneys and a square tower with a strange cylin- der on top. Faraday Hall was Victoria University's science building and stood on that land for thirty years. Victoria College is now empty and for sale; Faraday Hall was demol- ished in 1909. But the end is perhaps neither so final nor so sad as it may seem.

In 1830, the Methodist Conference decided to build a semi- nary of learning. In 1831, in Hallowell (now Picton), a commit- tee of seven men met in the depths of winter and chose Cobourg as the site over York, Colborne, Belleville, Kingston, and Brockville. A preparatory academy, the school would lead the movement for democracy in education, with modest fees and without rigid religious study. Choosing the name "Upper Canada Academy" was, no doubt, a poke in the ribs of the Toronto Establishment and its "Upper Canada College". The cornerstone was laid on June 7, 1832, when enough funds had been gathered by popular subscription to proceed with con- struction. Architect Edward Crane ordered 100 cords of build- ing stone and 300,000 bricks and set his men to work. On June 18, 1836, the doors finally opened to this grand hall built to accommodate 90 boarders and their teachers. From their hill- top home, the lucky students enjoyed a sweeping view down over the busy town and out over Lake Ontario with its steam- er traffic. They had most likely arrived by lake steamer them- selves, if not on a bone-jarring journey with Cobourg-based Weller's stagecoach line.

Four months later, on October 12, after 19 months of effort in England, Egerton Ryerson finally secured a Royal Charter for the school from King William IV. Significantly, this was the first Royal Charter granted to an institution not aligned with the Church of England.

While both boys and girls attended the Academy, they lived in separate wings of the building and as separately in every respect as their teachers could manage. Girls and boys sat apart in the dining hall and the chapel and were made to march in separate columns to and from church. Classroom instruction was also mainly separate, for boys and girls were offered different curricula. Boys studied Greek and Latin; girls studied French. In each room, two students slept in one bed, and their days began at five a.m.

Egerton Ryerson, farseeing mentor of Upper Canada Academy, had higher plans for the school. He envisioned a university. On August 27, 1841, a provincial statute estab- lished Victoria College as a university degree-granting institu- tion--The University of Victoria College--although universi- ty level operations did not begin until October of 1842, with Ryerson as the first principal. Coincidentally, Queen Victoria's mother, the Duchess of Kent, had given a sum of money towards financing Upper Canada Academy back in 1836, shortly before her daughter ascended the throne.

This new university may have borne the name of a young woman, but young women were now banned from attending. The American trend of co-educational education gave way to the English style of male-oriented universities. Women would be welcomed instead at the Ladies' Seminary in Cobourg, or at the Cobourg Female Academy, and later, at the Brookhurst Academy established next door to Vic. Gradually, women were allowed to attend lectures, although not to attain full degrees. Mary Crossen was the first woman to take lectures with the men at Vic, earning in 1877 the fine designation Mistress of English Literature, which was not, however, con- sidered the equivalent of a full Arts and Science degree. Mary was smuggled into the lecture room escorted by Chancellor Nelles through a door from his private residence so that she did not (horrors) have to face the stares of the young men in the halls. Not until 1880, when Nellie Greenwood of Cobourg enrolled in the science department, would women students again walk through the corridors of Vic and attend lectures on an equal basis with the men. "Of course, such a rare sight as a lady attending College excited at first great amazement, but as she came and went to and from her classes in a quiet, unobtru- sive, and lady-like manner, our surprise gradually passed away, and we grew to respect her more and more." (Acta Victoriana, April, 1884.) Nellie graduated with a B.Sc. in 1884 and so became the first female graduate of a Victoria College, Cobourg, course of study. Augusta Stowe had graduated in 1883 from the Faculty of Medicine sponsored by Vic but locat- ed in Toronto. Vic sponsored a similar French-speaking Faculty of Medicine, in Montreal, and was also associated with a Faculty of law in Montreal, L’Institut Canadien de Montreal. In 1873, the College established a Faculty of Theology at the Cobourg campus.

In 1850, the Victoria College Act was proclaimed laying the ground for the eventual move to Toronto. The Act allowed that the Board of Trustees, if at any time they deemed it expe dient, might remove the College from Cobourg to Toronto, Toronto being the hoped-for home of a provincial university of federated colleges. But in the meantime, Victoria College provided a social centerpiece and a definite intellectual cachet tor Cobourg, with sporting contests to attend (football and alley were most popular), picnics, musicales, debates and learned speakers such as Alexander Graham Bell. Towns- people could even entertain themselves watching students sweat through their oral exams. So it was not surprising that local politicians, fering fro Cobourg’s already floundering economy, fought hard to keep the College in town when, in 1887, after decades of complex discussions, the decision was finally taken, for both financial and philosophical reasons, to federate with the University of Toronto. Not only did most Cobourg citizens passionately oppose the move, so did the students and alumni of the day. Even a lawsuit by the town could not stand in the way for long.

The actual journey up the lake to the big city did not hap- pen until 1892. It is said that on the eve of the last graduation exercises to be held at Cobourg, disgruntled students found a key to the biology lab and fetched a skeleton. They carried it up onto the roof and tied it by its neck to the tower with a long rope, leaving it to swing for all to see until it fell in pieces to the ground below. Such protest was futile; the University of Victoria College packed its bags and its books and said a fond farewell to Cobourg.

But the Cobourg years live on in Vic traditions. Our college song. “The Old Ontario Strand" (contentious lyrics notwith- standing) stems from Cobourg, as does Acta Victoriana which was first published in 1878. The first raucous "Bob" party was held

Geological specimens, and Egyptian collection including-- a mummy --- contributed by the Rev. Dr. Lachlin Taylor, Indian masks and carvings from western Canada, and a meteorite, “the largest to date ever discovered” according to the Christian Guardian of June 12, 1878. "But [it] is now next to the largest as some relic-seeker has decreased its weight." That meteorite is now known as the Iron Creek mete- orite and is on loan to the provincial museum in Edmonton where it is at least a little closer to the sacred Indian site where the Rev. Macdougall "discovered" it in 1859. The giant meteorite had been an object of deep veneration for the Indians who called it the Manitou Stone, a man's profile being clearly visible when the stone is viewed at just the right angle.

The mummy has stayed much closer to Vic, I'm happy to report. The entire museum collection moved to Toronto in 1892 and for a time was housed on the third floor of the newly-built Victoria College. Charles Trick Currelly, himself a Vic grad, took great interest in expanding the college collec- tion. Supported by Chancellor Nelles, he received funding from the alumni and the Board of Regents and was out buying by 1903. A few years later, however. Vic wanted out of the museum business. Currelly's dream of a provincial museum was finally realized when the Royal Ontario Museum opened in 1914. The Victoria Collection moved once more and "our" Egyptian mummy, Vic's oldest resident, is now receiving visi- tors just across the road. His name is Antjau; he lies in his sar- cophagus, the inside lid of which is painted with the sky-god- dess Nut who holds her arms over him. Quite a change from the days when he used to tour around in the back of a buck- board as the Rev. Taylor travelled the countryside lecturing.

I am equally pleased to report that parts of Faraday Hall itself have survived. A Gothic window, some three metres tall, from above the entrance of Faraday was rescued from a demolished building on Division Street by the Cobourg Historical Society and is presently resting among other trea- sures in the Cobourg Archives. The Cobourg Historical Society has recently decided to use an artist's rendering of the graceful window as their symbol. And--if you walk up Division Street from King, you just might find, on the east side, two grinning lion heads. Removed from their perches high on the corners of the Faraday Hall tower and incorporat- ed into the facade of what was once George Thompson's new general store, they are obviously happy to have survived. Look for them.

Birgitte Nielsen Worrall (Vic 7TO) is a Toronto photographer; she pho- tographed the Vic building in Cobourg, on the front cover and page 4/5, and the lions, above and page 4. (Please also see page 2.)

William Bartlett sketched “Cobourg” on a trip to Upper Canada in 1838, two years after Upper Canada Academy opened. The resulting engraving (above) appears in Canadian Scenery, published in 1842. A May 3, 1836, advertisement from the Cobourg Star laying out fees, living conditions, and staff of the soon-to-be-opened Upper Canada Academy. 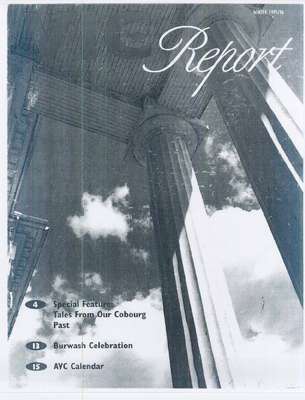