Coleman. Arthur Philemon, PhD., Professor of Geology and Natural History, Victoria University, Cobourg, was born on the 4th of April, 1852, at Lachute, pro- vince of Quebec. His father was the Rev. Francis Coleman, a minister of the Metho- dist Church of Canada, and his mother, Emmeline Maria Adams, was a descend- ant of John Quincy Adams. His early education was obtained in various public and high schools of Ontario, according to the station occupied by his father, as an itinerant Methodist minister ; and this ended in a coarse of two years in Cobourg Collegiate Institute. In 1872, he matricu- lated in Victoria University, Cobourg, and after four years' residence, graduated, in 1876 as Bachelor of Arts, taking honours and a gold medal. On the advice of Dr. Haanel, whose eloquence and ability as a professor had inspired him to study science, he sailed for Europe, and in 1880, matricu- lated in the University of Breslau, in Prus- sia, Dr. Haanel's alma mater. During four semesters he studied geology, mineralogy, botany, histology, chemistry, etc., under such distinguished men as Roomer, Cohn, Goeppert, Dilthey, Poleck, Liebisch, and others. His dissertation which was on the " Melaphyres of Lower Silesia," and de- manded hard work in microscopic petrogra- phy, as well as some months geologizing in the Giant Mountains, on the border between Silesia and Bohemia, was accepted, and after examination he was admitted to the degree of Doctor Philosophiae (cum laude) in 1882. "While in Europe, Professor Cole- man made numerous geological expeditions in Germany, Austria, Switzerland, Italy and Scandinavia, and most of one summer he spent in Norway, wandering on foot over the mountains and fields collecting speci- mens, and observing the results of glacial action. The most notable points in this journey were the ascent of Galdhoepig, the highest mountain in Norway, and a voyage along the coast to Hammerfest and the North Cape, to see the Lapps and the midnight sun. At Knivskjaerodden, a few miles from the North Cape, the ship on board of which he was, The Nordstjern,, went ashore in a fog, and became wrecked on that bleak coast. The misfortune occurred at about two o'clock in the morning, but aided by the perpetual daylight, the passengers and crew succeeded in reaching shore, and with- in twenty-four hours thereafter, they were rescued by another steamer and landed at Hammerfest. After a short visit to France and England, he returned to Ontario, and towards the end of 1882; was inaugurated as professor of geology and natural history in Victoria University, Cobourg. Since that date he has continued in the same position, varying his life by journeys with geological ends, in view; in this way he visited the Rocky Mountains, the valley of the Colum- bia, and the -SeLkirks, before the Canadian Pacific Railway was built, travelling by pack pony, canoe or on foot. The professor be- longs to the Methodist church, and in poli- tics is a Liberal.

Burwash, Rev. Nathaniel, S.T.D. Professor of Biblical and Systematic Theology, and Dean of the Faculty of Theology Victoria University, Cobourg, Ontario, was Born in Argenteuil, province of Quebec, on the 25th July, 1839. His father, Adam Burwash, was a descendant of an Enrich family from Burwash, in Sussex; and his mother, Ann Taylor, was from Argrleshire, Scotland, and was the eldest sister of the late Rev Lachlin Taylor, D.D. His great grandfather was a United Empire loyalist. Nathaniel received his rudimentary educa- tion in the schools of his native place, and then entered-Victoria University, where he took the arts course, and graduated B.A in 1809. He then devoted his time for two years as a Public and Grammar school teacher , and in 1860 entered the ministry of the Methodist church. From this year to 1866 he filled the position of pastor in churches in Belleville, Toronto, and Hamil- ton. In 1866 he left Canada for a time, and entered Yale College, New Haven. U.S., for the purpose of studying the natural sciences and having completed his course, he re- turned home in 1867, and was appointed professor of natural sciences in Victoria University Cobourg. In 1873 be was pro- moted to the professorship of Biblical and Systematical Theology, and was also made dean of the faculty of theology in the same institution. This important position he still occupies, and since his appointment fully one-fifth of the entire ministry of the several Western conferences of the Methodist church have been his students. Professor Burwash some years ago took an active in- terest in the Volunteer movement, and was one of those who risked his life at Ridgeway, in repelling the Fenian hordes who at- tempted to desecrate Canadian soil He has travelled a good deal, and has visited several of the universities and educational institutions of Great Britain, France and Germany. The professor has not been an idle man, as the record of his life amply testifies, and to those who would like to per- use some of his literary productions, we recommend them to examine his works on : “Nature, Genesis and Results of Sin"- “Relation of Childhood to the Fall, the Atonement and the Church"; "Wesley's Doctrinal Standards"; and his "Commentary on Romans" On the 25th December, 1868 he was married to Margaret Proctor only daughter of E. M. Proctor, registrar of Lambton, a graduate of the Ladies- College, Hamilton. 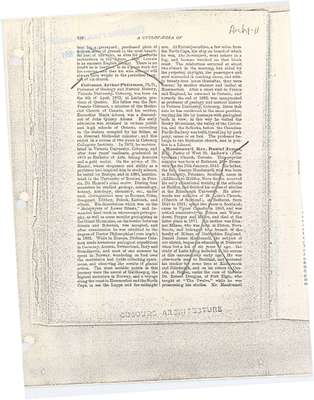