Trinity United Church began as a small frame Wesleyan Methodist Chapel, built on this property in 1824 for 300fi. The population of Cobourg was 100 persons at the time. Two "circuit riders" in the area: the Reverend Anson Green and the Reverend David Breckenridge became the first preachers.
The Establishment of the Methodist "Upper Canada Academy," later Victoria College, in 1836, made Trinity their "College Church". Reverend Egerton Ryerson, a founder of the Academy and a prominent Upper Canada Clergyman and educator was pastor of this church 1826 to 1827. The west half of our present church, including the main entrance and north and south porch entrances date from 1852 when the brick church was built.
Reconstruction and expansion of the church was undertaken in 1900 - 1901 to accommodate the increased membership with the union of several branches of Methodism. Renamed the Cobourg Methodist Church, the building was enlarged by the addition of transepts, a new chancel and organ loft.
In 1925, with the union of the Congregational, Presbyterian and Methodist churches in Canada, the church was renamed "Trinity United Church". A church that has occupied a large part of Cobourg's history. Trinity United remains a community oriented place dedicated to the Glory of God. 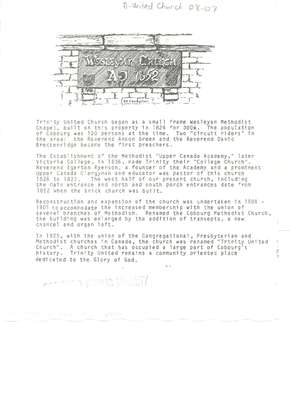