Before roads and settlers, the only form of travel was by foot or horseback. Early travellers carried their scarce belongings in a leather bag which had two pouches; one pouch contained oats for the horse and the other carried the traveller’s personal belongings.

Early water travel consisted basically of bateaux. Bateaux were a type of boat which were about 30 to 40 feet in length, end six to eight feet in width. They were flat-bottomed and could be sailed or rowed or poled. They were not a fast mode of transport, taking one pioneer three months to go from Quebec to Carrying Place.

Roads were difficult to build at this time because settlement was thinly dispersed over hundreds of miles, land was heavily wooded and watered by many streams and there was immense quantities of unoccupied land which resulted from reserves, Indian lands and land absentees and holders.

Finally, for defence purposes, the government began building roads. The first road to be built in this area was the Danforth Road. It was set well back from the lake. This road extended from Kingston to York but was little more than a blazed trail. Kingston Road was built around 1817-18. It was south of the Danforth Road and much closer to the lake. It was a better road than the Danforth.

In 1796, Asa Danforth was commissioned to build a road from Kingston to Ancaster, which is at the head of Lake Ontario. When Danforth was first appointed to build the road, the price was set at $30 per acre, allowing four acres to a mile. Later the price was reduced to $22.50 per acre. As each ten miles was finished and inspected, he received one half of his payment.

The road itself followed the Bay of 0uinte from Kingston to Adolphustown where a ferry was used to get over to Prince Edward County. It then went through Picton and Wellington, and then followed the lake westward. It took three years to build and then it was little more than a blazed trail. However, it was the first real entrance into the country by land for the early settlers, and it also provided a link with the outside world for all the settlers in Brighton and vicinity. The old Smithfield Road follows ,the path that the Danforth Road once followed. The road was not used for long distance travel because carriages and wagons could not be used on it. People could still only travel on foot or by horseback.

Falling into disrepair, the road was repaired in 1811 and again in 1816. At this time it became known as the York Road and was now of corduroy construction. A corduroy road is one in which tree logs are placed side by side over the road bed.

Roads like these were supposed to be maintained by the people who lived on them. Of course, unoccupied areas suffered greatly.

In the 1840s, experiments were conducted in building plank roads, because the roads were in such a very bad condition. The most common road surfacing material used was gravel and could serve as a good road surface, although stone, when broken into one and one-half inch cubes, was much better.

In 1817, the first stagecoach ran from York to Kingston. The most famous stagecoach operator was William Weller of Cobourg. In the summer of 1830, he operated coaches twice a week between York and the Carrying Place. Later, the number was increased to five a week. Cobourg was a connection to the interior, with roads running north to Harwood and Gore's Landing. Tollgates were found on many roads.

The Grand Trunk Railway, which began on Oct. 27, 18S6 was not the first railway to operate in the United Counties. The Cobourg and Peterborough Railway had been in operation since 1854, and the Port Hope, Lindsay and Beaverton Railway had begun construction the same year.

The wealthier citizens of Cobourg backed the Cobourg and Peterborough Railway project as the best means of tapping the rich resources to the north. As early as 1832 plans were well advanced, but did not get off the ground until a charter was obtained in 1852 and actual construction began in 1853.

Delays were caused by the construction of a plank road from Cobourg to Gore's Landing, many thinking this would adequately serve the needs. However, by 1850 interest was revived in the railway. The first sod was turned on Feb. 9, 1853 near the northeast corner of University Avenue and Railroad Street (Spring St.) and on May 19, 1854, the line was dec1ared open to Rice Lake. By November the trestle-bridge across had been completed, and by December 29, the line had reached Peterborough.

The Port Hope, Lindsay and Beaverton Railway had begun construction by the time the Cobourg and Peterborough Railway began operation. It opened on October 15, 1857 and in 1858 a branch line was built from Millbrook to Peterborough. Eventually the line became part of the Midland Railway when it was extended to Beaverton and Midland on Georgian Bay until finally in 1923 it was absorbed by the Canadian National Railway system.

During this period of expansion, the Cobourg and Peterborough Railway was in trouble. The trestle-bridge has weaknesses and there was no money to repair it. Ice jams further damaged it until in the winter of 1861-62 most of the bridge was washed down the lake.

The line, however, continued to operate between Cobourg and Harwood. In the 1880's it came under control of the Grand Trunk, Rice Lake; but Sunday traffic and picnic outings could not maintain expenses, and by the end of 1890 the old railway was out of business.

During the early 1850's, the Grand Trunk Railway was constructed. When it reached Port Hope, the engineers faced the problem of crossing the mile-wide estuary valley of the Ganaraska River. A high level steel bridge, supported on tall stone pillars was built. It was a 19th century masterpiece.

During World War I, 1923, the Grand Trunk became part of the Canadian Railway system. It is interesting to note that while the Canadian Pacific Railway obtained its first passenger cars in 1822 from the United States, the company's first Canadian supplier was the Crossen Car Co. of Cobourg, which delivered an order of sleeping cars in 1885. 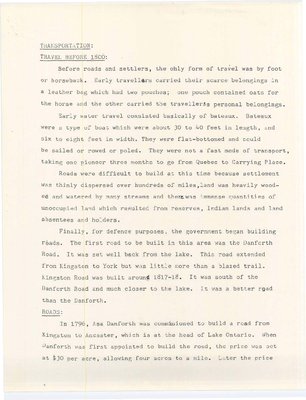