The Rutherfords remember when the ferries were operating in Cobourg. There were two of them; one would start from Rochester and the other from Cobourg. They could hold 28 cars of coal and took on passengers as well. Two or three times a year there would be excursions to Rochester. There would be large bands playing and it was very exciting.

The roads in Cobourg at the turn of the century weren't very good. In the spring and early summer King Street was very muddy. There were dreadful mud holes dotted along the street an especially large and hazardous one being in front of St. Peter's Church.

The country roads weren't much worse than the town roads, although Mrs. Rutherford remembers being glad they had reached the town because they had a smoother ride. The town toads got a little more dirt and gravel than the township roads. In the wintertime they often went by cutter (sleigh) into town. Sometimes the roads had so many snow drifts on them the people drove through the fields.

There were no paved roads in early 1900s but there were corduroy roads. Grand Trunk Road (now highway 45) was almost completely corduroy road. Many roads that went through swamps were also this type of road.

Most people traveled by horse on the country. They had two types of horses. One was used for horse back riding and the other "driving horses" were used to pull buggies.

There was no public transportation to carry you around town. However the Hotels and Livery Stables ran horse-drawn buses that picked people up from the train. It cost $1.00 to get to Toronto just before W.W.1. Some people took the boat out of Cobourg. 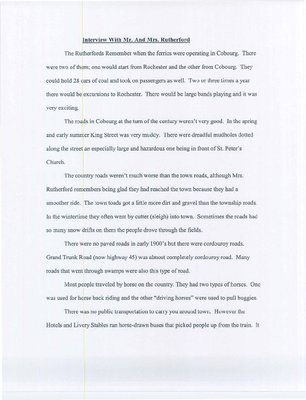