We learn with suprise and deep regret, that the Cobourg and Port Hope Road Company have placed a tollgate an their road, although only just gravelled. This is one of the most outrageous pieces of imposition ever practiced upon the public, and if persisted in, will, we hope, be presented by the Grand Jury at the next Assize. No gravelled road, and so far as we know no macadamized road, either, has ever had toll-gates placed upon it till it has be come settled, why then should the public be imposed upon in this particular case? What right have the Company to expect that the public will quietly submit, not only to pack their road, but also to pay for the privilege. If the Pike be not immediately taken off the public shall be made aware of names, and something more of the gentlemen chisellers who have adopted this arbitrary and unusual proceeding.

from the Cobourg Star, October 18, 1848
BURNING OF TOLL HOUSE AND GATE

On Sunday night last, the Toll House and Gate on the Port Hope Road, .were, burned to the ground. We regret to say that there is no doubt as to its having been done designedly as a very hard feeling has grown up against the Company, from their having exacted Toll before the road was properly packed. They might have known that no community would quietly submit to drive their teams and heavy loads through six inches of gravel and pay for the privilege. But we would not be understood to sanction the lawless proceeding which has taken place. No possible good can ever arise, in any case, from violating the law. The proper course to obtain redress of a grievance of this kind, would be, to bring the matter before the Grand Jury, and indict the Company for a nuisance, (which the Toll Gate undoubtedly was.) We repeat we deplore the event which has occurred, and earnestly hope that our District will henceforth be free from any similar lawless proceeding.

from the Port Hope Guide, March I5, 1859
TENDERS WANTED

Tenders will be received until the 20th instant for the construction of 100 Mud Scows to run between Cobourg and Port Hope on the Macadamized (?) Road connecting the two places, which is owned by the Cobourg Capitalists. The company feels that the new mode of conveyance is necessary, as the loss of horses, wagons, and valuable lives during court week was fearfully alarming. Until the completion of the, said Mud Scows the Company will continue to exact toll from those who may be so fortunate as to escape through the gates. Though the legality of any such exaction may be open to question they confidently expect that, in aforesaid, the public will submit to be victimized. 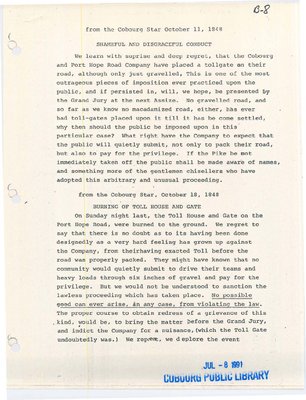