Notice, a Public Meeting of Presbyterians and other inhabitants of Cobourg and its vicinity, favourable to the erection of the University of Queen's College at Kingston, will be held in St. Andrew's Church, Cobourg, on Tuesday, 4th day of February next, at 11 o'clock in the forenoon, for the purpose of adopting such measures as will best promote this great object.

The meeting will be addressed by several ministers and laymen. Cobourg, 21st June, 1840.


Having been unavoidably prevented by public duties from attending the meeting held yesterday, in St. Andrew's Church, in promotion of this projected institution, we are unable to present our readers with the particulars this week, but are promised an account for our next number. We are happy to understand that the meeting was very numerously attended, and its object supported with unprecedented spirit and success, as the subscription entered into on the occasion will abundantly testify,-- for it amounted to the munificent sum of three hundred and twenty pounds.

For the Cobourg Star.

A public meeting of those friendly to the establishment of the University about to be built at Kingston, in connection with the Church of Scotland, was held in St. Andrew's Church here, on the 4th Inst.

The Rev. Thomas Alexander in the chair, and C.H.Morgan Secretary.

The Chairman, after having opened the meeting by prayer, and explaining the objects in view in calling the meeting, the following resolutions were proposed and carried unanimously:

1. That this meeting are of opinion, that Seminaries of learning, where a liberal education, founded on the great principles of the Christian religion, can be obtained, cannot fail to prove of incalculable benefit to any country, and are entitled to the warmest support of every good man.

Moved by the Rev. William Reed, and seconded by Mr. T. Scott.

2. That this meeting deem it to their duty towards the people of this country in general, and the Presbyterian population in particular, to promote the immediate establishment of an institution founded on Christian principles, in which all the branches of an enlightened education can be obtained.

Moved by the Rev. Henry Gordon, and seconded by Mr. Andrew Milne.

3. That not only has the establishment of a College become expedient for the purpose of securing a general and enlightened education, but has now become a matter of immediate and absolute necessity for training up a native ministry connected with the Synod of Canada.

4. - That this meeting have learned with great satisfaction, that a university connected with the Presbyterian population of these Provinces, is about to be established at Kingston, and that a bill for its incorporation is now before the Legislature, with every prospect of success. *

5. That this meeting hail with delight the vigorous movements which have been made by the Synod for the accomplishment of the great objects we have in view, and the cordial and liberal manner in which they have been supported in various parts of both Provinces.

Moved by Mr. Robert Hudspeth, and seconded by Mr. A. Jeffrey.

6. That this meeting pledge themselves to make every effort in their power for the establishment of the proposed University at Kingston, and to contribute of their worldly substance, as God hath prospered them.

Moved by Mr. William Lawder, and seconded by Mr. A. Stewart.

7. That Mr. Andrew Jeffrey be appointed Treasurer, and messers N.H. Baird, C.H. Morgan, K. Mackenzie, and Thomas Scott, Collectors, to solicit and receive contributions, under the superintendence of the Committee appointed by the Synod, with powers to add to their number and supply vacancies.


8. That a subscription list on Parchment (in order that it may be preserved in the archives of the University, and so perpetuate the memory of the benefactors of the institution) be now opened to give an opportunity to this meeting of subscribing to the College funds.

It was then moved that the Rev. Mr. Alexander do leave the chair, and that it be taken by Mr. R. Hudspeth.

When it was moved and carried unanimously,--

That the thanks of the meeting be tendered to the Rev. Thomas Alexander for his able conduct in the chair.

A subscription list was then opened, and subscribed by almost every one present. The amount subscribed on the day of the meeting exceeded 360 Pounds, and since then 200 pounds has been added to it, with the prospect of a considerable further addition, as many of our friends of other persuasions have not yet been waited upon.

Mr. Mackenzie, the Rev. messers Gordon and Reid, Mr. Boswell and Mr. Hudspeth, delivered eloquent addresses in support of their respective motions. That delivered by the Rev. H. Gordon will be long remembered by those who heard it, for its soul-stirring and fervid eloquence. We are glad to hear that there is a probability of the speech being printed.

* __The Bill has since received the assent of his Excellency, the Governor-in-chief.

The Presbyterian Church of this place, will be opened by the Rev. Mr. Ketchan of Bellevilee, on Sunday the 6th inst., at 11 o'clock A.M., and the Trustees have incurred a heavy debt in building, a collection will be up in aid of the fund.
Cobourg 1st. July, 1834.

CONSECRATION of the NEW PRESBYTERIAN CHURCH

This interesting event, it will be seen by an advertisement in to-day's paper, is appointed to take place on Sunday next; the duties of the occasion being assumed by the Rev. Mr. Ketcham, of Belleville, who has obligingly complied with a requisition to that effect on behalf of the Congregation. Fame speaks highly of this gentleman's talent's talents as a Preacher, and the day is, inconsequence, looked forward to with considerable interest, especially as, since the death of their late pastor, Mr. Miller, the numerous community of Presbyterians in Cobourg and its neighbourhood, have had few, if any opportunities of instruction from the Ministry of their own Church.

A numerously attended and highly respectable meeting of all classes of the inhabitants of Cobourg, was held last evening(Monday) in the Presbyterian Church, at which, Dr. Liddell, Principal of Queen's College, explained the origin and objects of that Institution; and we are highly gratified to learn, that the sentiments expressed by Dr. Liddell in his address, have met with the highest approbation on the part of those who were privileged to attend. -- Communicated. 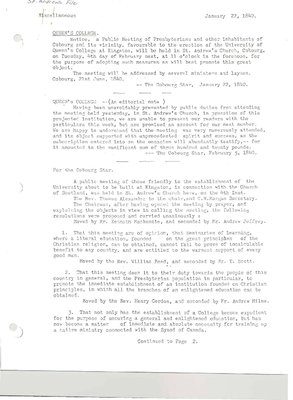