Full Text
Of Model Schools and Herbal Remedies
"The last touches of the painter's brush are now being put upon the framework of the new school building on Seminary Street...it is...one of the most attractive and useful school buildings we have seen in either Cobourg or elsewhere."

In the words of the Sentinel columnist, it was “quite an addition to that part of town.” The new public school, located on Seminary Street (now University Ave.), near Spring Street was originally built on two acres of land. This included, perhaps as part of the playground equipment, an orchard which once belonged to the Rev. J. Beatty.

A rubble stone foundation supports the two storey structure. The walls of red brick offer a warm contrast to the buff brick arches used above the twelve-paned windows. Each of these radiating arches has a prominent keystone cut from limestone. The façade is divided equally into three parts, with the middle one, which contains the entrance, projecting forward. The transom and sidelights of the original doorway can still be see but unfortunately the glazing has been replaced with wood. Topping this section, a triangular pediment gives the school its main architectural feature and is the location of the date stone inscribed: Public School A.D. 1874. Arranged in pairs, the ornamental brackets which support the eaves, remain in good condition, but a large turret which once rose back of the gable has been removed.

The contract for this impressive 70 ft. by 40 ft. structure brickwork, for what was then the largest public school in town being completed by Samuel Retallick.

Inside, the primary department on the main floor boasted a raised gallery which was designed to promote (in the vernacular of the profession): “the improved system of teaching by object lessons, and by combined responses and recitations by the children which experience has shown is by far the best mode of securing the undivided attention of the younger.” The latest in black-boards – fixed to the wall – and new advanced seats and desks, also “firmly fixed and quite immovable”, were featured upstairs.

Manufactured locally by Crossen’s Furniture, the chairs were described by a reporter – perhaps recalling his own school days – straight as old chairs and backs which seemed to be the invention of some straight backed soldier of the old school, or someone who had been admiring the customs of the aborigines and would like to see our babies strapped on a straight board”. Glass ink stands were built into the desks with metal lids provided to keep out flies and dust.

On opening day, so many children came to enroll that 100 had to be turned away after the school’s capacity of 400 had been reached. It was forecast that another school would be needed in a year.

In 1877, with the need for trained teachers growing, the Ministry of Education felt that the construction of more Normal Schools would be too expensive, and instituted instead the County Model Schools plan for the training of third class teachers, Cobourg’s new school thus became the County of Northumberland Model School. Mr. Sprague was the headmaster and all new teachers were required to spend a term of six weeks at the school. The town profited from two $100 grants (provincial and county) each year and, moreover, from the 100 teachers required to board nearby. Lectures included theory, management, discipline, school etiquette, and even the principles of lighting, heating and ventilating the school-house.

In 1916, the building was sold and, subsequently, housed a wire fence company. The Lydia E. Pinkham Company of Massachusetts purchased the property in 1917, turning out their first 500 gallons of herbal medicine in July of that year.

The company, with branches in Montreal, Mexico City, South America and Europe, used domestic herbs from the southern states and Europe. The medicinal roots, leaves and flowers were sifted, cleaned, ground and the mixed carefully. After weighing, the mixture was put in stone jars with alcohol and water solvent, wrapped, packaged and shipped all over Canada. In a 1917 advertisement for Mrs. Pinkham’s vegetable compound, its benefits were extolled as a household necessity. One lady, described as sickly and delicate whom doctors felt would go into consumption, began to feel better after the third bottle.

Today, the old school is used by Triangle Plumbing, and through their efforts, the façade retains much of its historic appeal. 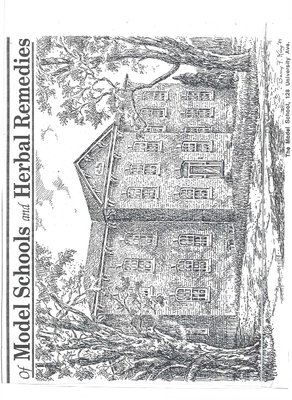