Preserving the past in the present for the future

Your letter was like a little mine of information on the past that invoked a wave of nostalgia, emotionally, and the lifting of certain visually on what I had long since forgotten.

In a conversation with Alec Lucas recently, we learned that in your deafness is a handicap that you patiently accept and carry on regardless. Learning this, I thought of Beethoven, whose Fifth Symphony was a defiant gesture to make at the Fates that were so unkind as to deprive him of his hearing. He went on to write greater music in the remaining four. Of such is the essence of history throughout the ages.

Recently I received a letter from Jean McFiggin telling me that the Cobourg Historical Society, or someone else had contacted her about Allen Ash building on Danforth Road that we once called the base line.

Mrs. McFiggin and I have a grand-mother in common; whose maiden name was Emily McEvers. As a girl of sixteen years she worked for my grand-father ALLEN Ash a widower at the age of forty-five. He married Emily McEvers in 1866 where she was working so evidently the house dates back to at least 1866. I have the original marriage certificate.

On the death of ALLEN Ash, his widow married AL Ash whose full name was Samuel Allen Ash, Possibly a distant, but not an immediate relative for the Ash phratry took up land in Hamilton Township, as it was known, as early as 1795, and I have records to that effect. Several of them along with Fishers were in the militia of the war of 1812, although I doubt that they ever fired a shot.

I am sure that my mother and my aunt Huldah (the Fishers of Cobourg are descendants of Hulda Ash) will be stirring in their graves of the Union Cemetery, if someone should designate the Ash building on the Danforth Road as being built by AL Ash for it is doubtful that AL Ash was born when this building was erected. It was so solidly constructed that it was standing when I visited it at the time of Leonard Lucas’ funeral.

AL Ash, although bearing a similar name to his employer Allen Ash at the time of the latter’s death was the grand-father of Mrs. Jean McFiggin. From her letter I assumed that she was under the impression that her grand-father built the residence. Undoubtedly her grand-mother want there to live but that would be as late as 1866.

I commend you greatly for your writings on the Ash tribe, but having sent literature to the Cobourg and District Historical Society in the bi-centennial year that would explain this matter, I wonder why they never contacted me to get this designation correct. It is possible for me to supply more accurate data than the younger generation for I have developed some analytical skill in listening to, or reading oral history. Eddie Guillet wrote a “Tory” version of the part played by the Ash men in the Rebellion of 1837. (As Patriots or Rebels if you will.) Surely it’s available in the Cobourg Library under the mane The Cobourg Conspiracy. Is the Cobourg Historical Society so enamored of colonialism that they fail to give any attention to Whig history?

Could you provide a copy of this letter and mail it to the President or Chair-person of the Society that I may assist them if they intend to proceed on the matter of designation, before they make a grave mistake, for Allen Ash is now written into history in the Music Section of the National (no longer public) Archives of Canada at Ottawa.

This post-note is valuable information for you

The book COBOURG by Eddie Guillet is the poorest work he ever wrote, more of a pot-boiler and advertizing medium than a work as estimable as his Lives of the Patriots etc.

While writing it, he contacted my double cousin, Mary (nee Fisher-Ash) who showed some temperament over his neglect of the Ash family who obviously took up land inside the Cobourg limits which he arbitrarily set to suit his purpose at the time. I am not defending Mary Fisher Campbell for she had little knowledge of her ancestry and too much family pride. For all of E.C. Guillet’s good works, consult Alec Lucas who knows the field in which Eddie worked very well.

History, as a German Colonel at the P.O.W. Camp in Gravenhurst once remarked, “is only as objective as the historian who writes it.”

I have a penciled obituary written by my mother in 1889 on the death of her father, Mother wrote poorly, although she rode into Cobourg on horse-back to take lessons in piano and violin before her marriage to Mark Fisher, Jr. The last will and testament of her father was then being contested by her mother and AL Ash who was soon to marry the widow. I suspect that mother exaggerated the amount of money involved, but it is certain that Allen Ash possessed four farms at the time of his death.


The whole story would make an excellent material for a novel on colonial days if some competent author were available.

As the misquoted aphorism goes,
“Where there’s a will there are relatives.”
Subject(s)
Correspondence
Ash Family 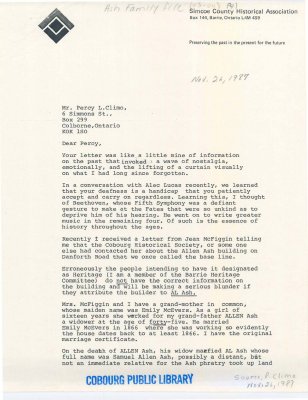