The history of any Canadian should begin with the first North American ancestor – in this case, the Rev. Samuel Armour, latterly of Peterborough, Ontario.

Born in 1875, the youngest of seven children, the Rev. Armour was the son of John Armour, farmer, of Maghera, Londonderry, Ireland, and his wife, Agnes Bryson. The family is thought to be of Scottish origin. A John Armour was a professor in 1620 at Edinburgh University, and Robbie Burns married a Jean Armour.

As a staunch Presbyterian in Ireland, it was necessary for Samuel Armour to obtain a university education in Scotland. Trinity College in Dublin was for Anglicans only. He therefore enrolled in 1803 at Glasgow University, from which he graduated as M.A. In 1806, he was called to Doune, Perthshire as a minister of the Secession Church. He married Margaret Douglas of Hamilton, near Glasgow, who was born 27 November,1789, at Stirling. Four children were born in Doune, Scotland, and three more in Upper Canada.

The Rev. Armour emigrated to York, Upper Canada (now Toronto) in 1820, to take charge of a Presbyterian church. The congregation having proved too small to support his growing family, he augmented his income by teaching school; briefly at Newmarket, Ontario, later becoming the second Headmaster of the Toronto Grammar School which had been founded by the Rev. John Strachan, who was later to become the first Anglican bishop of Toronto.

At the age of 41, in October, 1826, Samuel Armour was ordained an Anglican minister in the Parish Church of York, situated whore the Toronto Cathedral of St. James now stands. About this time he moved to Scotch Plains (Peterborough) as Headmaster of the Government school, then a log building situated at the corner of McDonnell and College streets, where it served the double purpose of school and church.

An ardent student the Rev. Armour continued to study, and mastered Latin, Greek and Hebrew, in all of which he both read and wrote. In 1832 he was obliged to resign as headmaster for health reasons. He was appointed rector of St. John’s church, Cavan. There being no church built until 1852 in Manvers, he also served that community, travelling on horseback to hold services in the settler's homes, and to perform marriages and christenings. At times a key-ring had to be employed in lieu of the traditional wedding ring! He also farmed a number of acres.

Though an 1854 portrait of Mrs. Armour, now in the Cobourg Art Gallery, shows her as an austere person, this must be due to the rig-ours of "sitting” or the inability of the itinerant artist, for a photo of her in "widow' s weeds" taken in Bowmanville where she lived with her son Robert, shows a gentle, kindly face. And the 0ptions of the pioneers amongst whom she lived and worked is of a kindly spirit. She died at Bowmanville 9 August, 1873.

The Rev. Samuel Armour died 25 February, 1853, and is buried at St. John's church, Ida, near Cavan. His memory in Peterborough is perpetuated in the names, Armour Road and Armour Park. The famous lift-lock is said to have been built on former Armour property.

A memorial window to Samuel and Margaret Armour was installed above the altar in St, John's church, Ida, by their youngest son, The Honorable John Douglas Armour.

John Douglas Armour was born 4 May, 1830, at Peterborough. He was educated at Barron's School, Rice Lake; Upper Canada College and the University of Toronto. An excellent scolar, he was Head Boy at Upper Canada and entered U of T as a King's College Exhibitioner. He graduated in 1850 with the Gold medal in the Greek and Roman Classics. While studying law he was articled to his brother Robert, 12 years his senior and to Chancellor Vanoughnet. He was called to the Bar in 1853. He settled in Cobourg, Ontario as partner to Sidney Smith, who later became Postmaster General.

The Cory and Clench bloodlines produced artist and artisans, but seems to have lacked in initiative and business acumen. The infusion of Armour blood had a salutory effect, for, of the ten children of the Armour-Clench marriage, many achieved notable success. Kate Reed was noted as an interior decorator of many of the CPR hotels. Stuart Armour was an hotelier in California and owned the Cadboro Beach Hotel in Victoria, B.C... George Armour was a minig!,and mechanical engineer. Dr. Donald Armour, CMG,FRS, MRCP of London, England was a famous neurological surgeon during WW1. Eric Armour, KC, was rapidly following in his father's footsteps, and at his death, was a Justice of the Supreme Court of Canada.

In 1858, J.D. Armour was elected to the town council of Cobourg, and re-elected in 1859 and 1861. On the formation of the famous Cobourg Battery in the 1860's, he was commissioned a 2nd. Lieutenant. He has appointed to the Senate of the University of Toronto in 1859. His appointment as Chief Justice of the Court of Queen's Bench in 1887 by Sir John A Macdlonald was inspite of the Fact he was an ardent, lifelong Liberal.

In character he was by all accounts, an impatient and exacting man who did not suffer fools gladly. As the son of a Calvinistic Presbyterian-turned-Anglican, of Ulster and Caledonian antecedents, he held strong religious views.

Of the Wyly Greer portrait t in his scarlet and ernie robes now in the courtroom of Victoria Hall, Cobourg, an American news- paper woman wrote: “He looks out from the canvas with the eye of omniscience and might - an all-seeing eye, which makes Truth seem the only way out. Yet on his face there is a benevolence and humour. A magnificent creature, that magnificence is enhanced by the splendor of his trappings. The face, firm and strong, is framed by thick, white hair. The eyebrows are like two thick moustaches making a protecting thatch for the strong, penetrating eyes. The nose is eagle and fine. The chin square without brutality. Such a face turned on me for questioning would invite speech and the opening of pockets of the mind. His brilliant robes fit him as he fits them - easily, finely."

The British Dictionary of National Biography has this to say of The Hon. John Dougles Armour:"He was appointed County Crown Attorney for Northumberland and Durham on 26 of March,1858, and Clerk of the Peace on 2 May, 1861, and a, Queen’s Counsel by Lord Monck in 1867. He was elected Warden of the counties in 1859-60. In the same year he was chosen a Senator of the University of Toronto, and in 1871 became a bencher of the Law Society of Upper Canada. In 1874 he declined the Liberal nomination for West Northumberland in the House of Commons. He was appointed a Puisne Judge of the Court of Queen's Bench in 1877 and was promoted Chief Justice of that court in 1887. He was made Commissioner to revise the Ontario Statutes in 1896. In July, 1900, he became Chief Justice of Ontario and President of the Court of Appeal. He declined a knighthood more than once. In June, 1902, he received an honorary LL.D from his university. In November, 1902, he was nominated a Puisne Judge of the Supreme Court of Canada by Sir Wilfred Laurier. In May, 1903, as one of the 'distinguished judges of repute', he was chosen by the Canadian government to represent Canada on the International Tribunal constituted to decide the Alaska Boundary dispute. He died in London on 11 July, 1903, Whither he had gone to attend the sittings of the arbitration. A memorial service was held at the Temple church in London. Armour was among the greatest jurists Canada has produced. Absolutely fearless and outspoken, he not infrequently aroused hostile prejudice. His alleged unfriendliness to corporations failed to affect his judgments, which were based on a thorough knowledge of the law and a profound insight into human nature."

When he died in London, the British government offered to send his body home to Canada by warship - an honour usually paid only to Ambassadors who died in the country to which accredited. The honour was declined as not being in accordance with Mr. Justice Armour's tastes.

Quotes from various newspaper obituaries give further insight into his character and abilities. "The ablest and most practical of' our Ontario judges." Regarding his appointment to the Alaska Boundary Commission, ~No better selection could have been made." “He was the brains of the Bench.” “His justice was even-handed." "His whole judicial life is embodied in-volume after volume of Ontario law reports, which serve as the best memorial of his ability and erudition." "It has been said that a man should live as though he were immortal, and Judge Armour carried that into practice. His robust character hid any physical weakness (even though) a mortal disease had seized him. He took up the laborious duty (of the Alaska Boundary Commision like) a man in his prime. He eagerly read enough books to make an undergraduate falter." "His death removes a distinctive jurist and a strong personality from the public arena. Even though the Alaska Boundary question had scarcely been entered upon, he may be said to have died as he had for 45 years lived - in the public service, at the post of duty. At the University of Toronto convocation in June, 1902, he received an honorary LL.D, which he regarded as the greatest honour of his life. He possessed great shrewdness and common sense, a good knowledge of human nature and legal learning, and abilities of a high order. His opinions were expressed with a refreshing candor, wit and humour. He cared not for public opinion. He was an admirer of sterling integrity, and was a staunch friend of clean politics, and a deadly foe of political crookedness, and bribery and corruption in every form. He was distinctly democratic in his tastes and ideas, and disdained the frills and feathers and fussiness of society and officialdom. He twice declined the honour of knighthood, which was usually conferred on Chief Justices of Ontario."

On 6 October, 1903, Chief Justice Taschereau before the Supreme Court of Canada had this to say, in part, of their late colleague: “Our brother, John Douglas Armour has passed to where the weary are forever at rest. The qualities that distinguished him, his useful career, the value of his services to Canada have been told and respected from one end of it to the other.(This court) deeply shares the eulogies upon his judicial life. ---- We greatly appreciate how great is the loss of the court and the country, suffered by his removal from our midst.”

Of this illustrious Cobourg citizen there is not one word on record in the Public Archives of Canada. His name is not even recorded. This short history, it is hope, will rectify that.

Extracted from the records of Stuart Armour of Hamilton Ontario, Who was economic Advisor to the Hon. C .D. Howe during WW II; Economic Advisor to the Steel Company of Canada, and upon his retirement at 85, was Chairman of The Great Lakes Waterways Commission in Hamilton; and from newspaper clippings, by Jessie J. Lowe J. J. Lowe Box 61 Ninette. Man. AOK 1AO 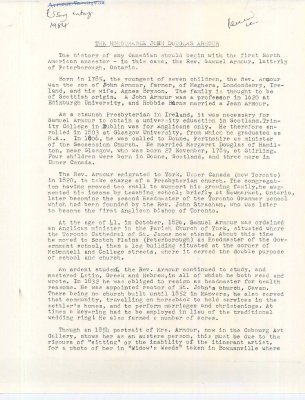