County churches have an annual tradition that is from “way back.” It is the yearly decoration day service. Actually, it was hard to find a Sunday during this past June and July when there wasn’t one, two three and in two cases four were listed in the coming events column of the Cobourg Daily Star for the same Sunday.

June 4 was decoration day at the Lakeport Cemetery and last Sunday marked the service at Merrill’s Cemetery near Roseneath. Two Sundays had four each: June 11 was the date for services at Vernonville, Macklins, Centreton and Baltimore, while June 18 was an equally full day with services at Bethesda North, Eddystone, Plainville and Castleton. All of them held afternoon services with the exception of Castleton which held a morning service with a dinner following in the church hall.

Not every cemetery is close to its present church. Some stand alone a few miles away, while others surround the former church building. The burning questions then, is whether or not to restore, for as long as possible, the old first church that was built by a generation past.

Relatives and friends come from afar to lay their flowers and to attend the worship service, such as they did on June 25 at Centenary church in Alnwick Township. This church was built on land donated from the farm of William Thackeray in 1866 and it was known as ‘Thackerays’ until it was officially named Centenary a few years later. Roseneath Women’s Institute Tweedsmuir History notes that older folk still referred to it as ‘Thackers.’ Before the church was built, there had been services held in the log schoolhouse known as Sherwins Appointment.

Alas, what to do about Centenary Church! It had become evident in recent years that to save it, funding and hard work would have to be done. Yes, it’s true that there is only one service a year—decoration day—and yes, it’s true we can’t save all the little churches. But one can counter this case with the largeness of the cemetery and the hundreds of relatives and friends who visit it throughout the year. These were the truths that faced a group of concerned people a year ago and the result was that the restoration idea took fire after the 1988 decoration day.

A committee was formed and they set a goal of $8000. The Committee members never looked back nor allowed themselves to doubt that they would meet it. The committee members are: Ross Poole, secretary; Jack Hastie, treasurer; Edna Hastie (who was a Thackeray and whose wedding was the last to be preformed in Centenary church), Willis and Velma Timlin, Lorne and Eleanor Elder and Verna Elder.

Ross Poole spoke briefly at this year’s decoration service and I quote a few words from him, “The restoration project will be on-going as monies are available. The old church is needed; it stands as a memorial along with the cemetery.”

At this summers service, and after a lot of volunteer work, the church showed a major face-lift. The outside is covered with new siding and a complete job of new windows has been installed. The inside has been redecorated even to some charming art deco work behind the pulpit and choir loft that was done by Joan Allen of Warkworth and Artie Cutt of Roseneath. The old church is now bright, clean and shining. 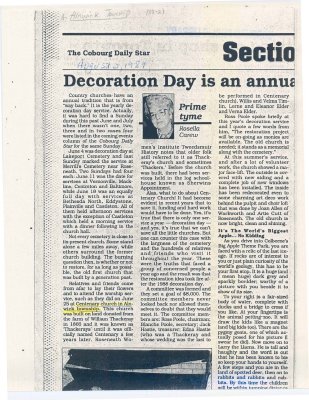