Media Type
Image
Item Type
Photographs
Description
Front of Strathmore, now Brookside Youth Centre
Notes
Judge George Mackenzie Clark, a successful lawyer, local politician, staunch Conservative, and personal friend of Sir John A. Macdonald, purchased the future site of Brookside School in 1869. His wife was the daughter of William Weller. Initially this purchase totaled 180 acres, but it was immediately subdivided into smaller parcels and sold. Judge Clark retained 24 1/2 acres, upon which he eventually constructed Strathmore. Although the exact date of construction is unknown, Strathmore was recorded on site in 1878. Judge Clark subsequently sold this property to Charles Donnelly of Pittsburgh, Pennsylvania in 1904. Strathmore became the summer residence of this wealthy American family for nearly a decade. After Mr. Donnelly died in 1906, his estate suffered severe financial setbacks and complications between the executors of the will and the family. This eventually resulted in the property being assumed by the Trust and Guarantee Company of Pennsylvania. In 1918, the estate was sold to Stephen Haas of Toronto. Strathmore continued as a family summer residence until the early 1940s.In November of 1943, the Strathmore estate was leased to the Ontario Government and became a girl's training school. The Department of National Defense expropriated the Galt Girls school during World War II and the provincial government relocated that school to Cobourg. The provincial government leased the McCook and Rowe estates located at this site, and the Cobourg Training School complex gradually took form. In 1947 the Ontario Government purchased the latter two properties. In 1950, the Cobourg facilities were altered so as to provide a training school for junior boys, as the site was deemed inadequate for the girls training school program and it officially became known as the "Ontario Training School for Boys, Northumberland County" at that time. Four years later, the training school was renamed Brookside School in an attempt to remove the stigma associated with the term "training school." In 1968 Brookside School became part of the Correctional Services Branch of the Provincial Government. 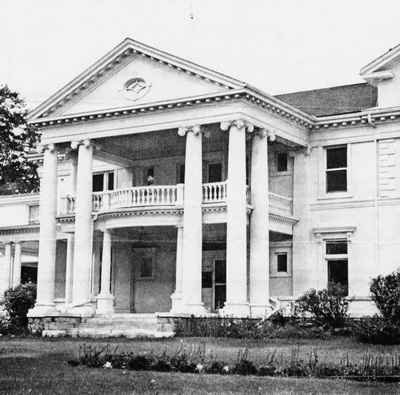