We the Commissioned Officers belonging to the Second Regiment of Lincoln Militia - Do sincerely promise and swear that we will be faithful and bear true allegiance to his Majesty King George, and heirs will defend to the utmost of our power against all traitorous conspiracies and attempts whatsoever which shall be made against his Person, Crown or Dignity; and we will do our utmost endeavours to disclose and make them known to his Majesty, His Heirs and successors, all treasons and traitorous conspiracies and attempts, which we shall know to be against Him or them. So help us God.
Thomas Clark - Lt. Col. 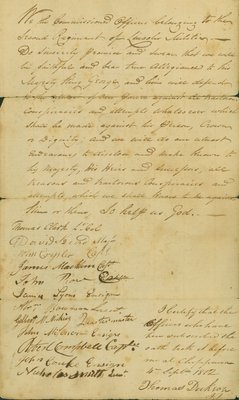