Media Type
Text
Item Type
Newspapers
Description
Volumes of interest were published between 1812 and 1815 with articles about the War of 1812. Issue for Dec. 13, 1811 has a report of the battle with the Indians at Tippecanoe (Indiana). The Battle of Tippecanoe was fought on November 7, 1811, between United States forces led by Governor William Henry Harrison of the Indiana Territory and forces of Tecumseh's growing American Indian confederation led by his younger brother Tenskwatawa. Issue for June 26, 1812 includes a proclamation issued by President James Madison confirming the Congress declaration of war against Great Britain. Issue for Oct. 23, 1812 includes a report on the Battle of Queenston Heights. Issue for June 11, 1813 reports on the Battle of Fort George. Issue for July 16, 1813: includes a speech of a Mr. Fuller and a Mr. Blake to the President, mentioning some war events, a letter from Gen. Dearborn to U.S. Secretary of War mentioning the Battle of Beaverdams, letter from an officer of the Army with an account of the Battle of Stoney Creek and other events, report on latest news from Sackets Harbour and attempt of British to attack that place, report on capture of British ship Eagle, report of British attack on ships sailing to Sackets Harbour. Issue for July 15, 1814 reports on the Battle of Chippawa.
Publisher
J. Cutler
Place of Publication
Boston
Date of Publication
13 Dec 1811
Subject(s)
War of 1812
United States - History
United States - War of 1812
Local identifier
SPCL PER AP 2 W346 v.1 no. 8
Language of Item
English
Copyright Statement
Copyright status unknown. Responsibility for determining the copyright status and any use rests exclusively with the user.
Contact
Brock University Archives
Email
WWW address
http://brocku.ca/library/collections/special-collections-archives
Agency street/mail address 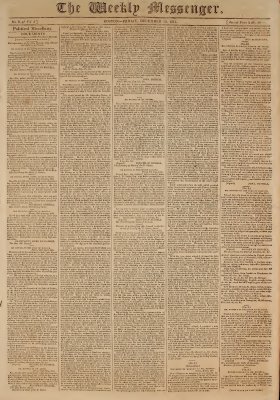