Transcript [original spelling and grammar retained]: Sacketts Harbour 26th Sept. 1813. Dear wife. From this you are informed that I am in health at this Date. When I last wrote to you I some expected to go upon and expedition but to us unknown we sat out and went up the Lake 3 Days Landed at Oswego The British Fleet appeared off, and we returned and saw our fleet upon our return, I think that our Regt. going was only a maneuver to get the Fleet out that our Fleet might come a threat[?] of them We expect to embark immediately into Canada as preparations are making to convey us over to them we are anxious to commence an action with them. Troops are daily coming in to the Harbour to take the Stand in our absence, we shall not be here 3 days before we try their[?] Powder. they are daily defecting[?] to us from Canada very fearful of the consequence of our Resisting[?] of them…our Fleet is now out and has been for 6 or 7 days. The Lake Erie fleet has done great things. I hope ours will be as successful. I think that our Generals are waiting to hear from them as every thing is ready[?] of to embark various opinions reflecting were we shall attack them some say at Kingston others at Montreal and others at Prescot—Mr. William Butler and D[?]…are well and in Spirits, Sergt Daniel White is very hearty for him, M. Samuel C[?] is well and in good health Benjm Thompson is well Charles Bryant is well [?] is well Eben[?] Smith is very much plagued with the Rheumatik Disease[?] he……… his limbs very often for being Crippled[?] he is at the Hospital I often visit it to see the sick Jacob Barnes is at the Hospital but recovering fast been very sick. Luther Gregory is at the Hospital and on the recovery, Sergt. L[?] & Smith are well, Henry ………[?] is well, very healthy have not more die here than 3…[?]to the best of my knowledge. I will make a few remarks upon the place it abounds in Lime Rock more than Thomaston and not every person to my knowledge burn it, and in the whole Town not but one Pump that supplies the Towns People and Soldiers and a ………[?] of such a Lake of water the Lake water is good for drinking but the water near the Shore is exposed to all kind of filth being thrown into it. The officers with whom I have been with have used me kindly and I get quietly by them. The Lieut. Downer who recruits at Thomaston tell me he has thots[?] of Leaving the army if so I must say I am greatly sorry as he was my ……[?] friend although he Left us and went in a northern Company it is a Company……………[?]worthy an officer as he proves to be, I cannot get any higher than a Sergeant or Quarter Master Sergeant which I may have without any friends at Thomaston assisting me. I am a Sergeant and Sergeant Daniel White is expecting[?] to be a Quarter Master Sergeant, and a number of his friends from Thomaston have went to their Major for him in the 9th Regt Major….[?] and he expects to obtain a Commission as I ……[?] expect to be promoted and it died away he will have the Laugh upon me, I wish that My Friend Dawes would[?] put the question to Col. Foot? to write to our Col. E.W. Ripley if he has …[?]in the …[?]taken by him and others of my …[?] friends[?]. I expect to come home this winter without fail. I remain your Loving Husband till Death. John Bentley for Betsey Bentley Thomaston P.S. The next Letter will be ……[?]to Mr. Dawes[?] and shall write as soon as our Fleet arrives or if we are ordered off tomorrow shall write before I leave this Place. I have understood that many letters have been ……[?]to me. I have received only 2 from Mary, one from Mr. Dawes, one from William Thompson and have answered them please to write……[?]to S. Harbour. 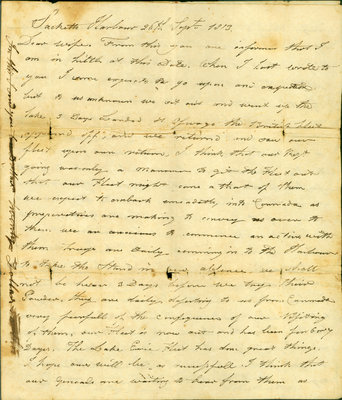