This excerpt from the Dictionary of Canadian Biography Online describes his role in reestablishing the BMEC in Canada following a period of reunion with the African Methodist Episcopal Church, an initiative spearheaded by Richard Randolph Disney, a free-born black American Methodist preacher.

"By the end of the 1870s the BMEC had 56 congregations with about 3,100 members, the bulk of the latter being in the Danish West Indies and British Guiana. Because mission work outside Canada had overtaxed the church’s financial resources, in 1880 Disney began negotiations towards reunion with the AMEC. The reunion was effected that year, and it was overwhelmingly ratified at a BMEC convention held at Hamilton in June 1881. A referendum showed that although a majority in Ontario was opposed, 86 per cent of the membership was in favour. Disney was accepted as an AMEC bishop and was assigned to its Tenth Episcopal District, a region embracing his former territory as well as some of the AMEC churches in Canada which had not joined the BMEC.

Reunification appeared to have been a triumph for Disney, but trouble soon occurred. A majority of the Ontario churches and preachers, led by the Reverend Walter Hawkins of Chatham, sought to re-establish the BMEC, fearing the loss of their distinctive identity and perhaps feeling that the Caribbean groups had exercised too much influence on the reunification question. In 1886 this group held an ecclesiastical council at Chatham, at which it was claimed that Disney had defected to the AMEC. At a subsequent general conference that year the BMEC was reconstituted. The conference deposed Disney, agreeing to “erase his name and ignore his authority, and cancel his official relationship as bishop.” The conference minutes also refer to a court case instigated by Disney which reached the High Court of Chancery in Britain, but records of this case have not been located. The reconstituted BMEC elected Hawkins as its general superintendent, avoiding the title of bishop for several years." 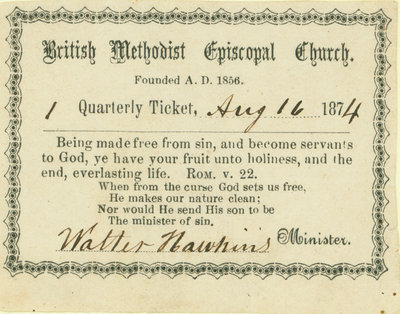