Mystery Question
Did Tom Nash write this piece?
[Please answer by clicking on the Comments tab]
Media Type
Text
Item Type
Documents
Description
This is a one-page promotional piece of writing from 1975 intended to attract industry to the town of Blind River. The writer relates historical happenings with the current situation, making the case that Blind River has the people, facilities location and is ready for industry to take advantage of these opportunities.

A BRIEF HISTORY OF BLIND RIVER

What we must keep uppermost in our minds as we talk of the history of Blind River, is that the North Shore area is ideally located along the Pre-Cambrian Shield and is surrounded by a wealth of natural resources which have not yet been fully exploited.

When Alexander Henry visited the Mississaugi Indians at the mouth of the Mississaugi River in 1761, a sturgeon fishery was in operation. Now 200 years later commercial fishing is still a small but important industry. It is said the absence of a processing plant is the reason tons of lower grade fish such as smelt, mullet and carp are not being taken.

In 1821, when the Hudson Bay Company took over from the North West Fur Company in our area, a fur trade post was already set up at Green Lake and at the mouth of the Mississaugi. Now 150 years later, a handfull of outdoor-oriented persons still derive a portion of their livelihood from the taking of fur bearing animals.

In 1850, the Robinson Treaty was signed with the Mississaugi Indian Band. All land between the Mississaugi and Penewobikong Rivers was sot up as an Indian Reservation up to the first rapids. A motel now stands where the first sawmill was in operation. With many ups, downs and changes of ownership and operation, the harvest of the forest has been continually taken, processed and manufactured at Blind River for over 120 years.

The initial discovery of conglomerate uranium ore, made within a few miles of downtown Blind River made the August 1st, 1955 issue of Time magazine. The discovery brought with it a boom town with all its advantages and disadvantages. Eventually things settled down and a steady, permanent mining town was established in Elliot Lake.

It is interesting to note that our area was one of the first in America investigated in detail by the first officers of the Geological Survey of Canada between 1847 and 1858.

In 1925, the Geological Survey of Canada in summarizing industries along the North Channel of Lake Huron stated - "Unless steps are taken within a quarter century to preserve the present forest, the rocky major part of the North Shore District is likely to become permanently useless, except for its water powers and possible mineral deposits".

With Ontario Hydro now conducting studies regarding the location of a nuclear generating station on the North Shore; the potential for mineral and timber related industries; and the ever-growing tourist trade, it is almost as if these professionals of half a century ago were looking inot the future and foretelling the great potentialities of the North Shore region.

Today, in 1975, we are a small but progressive town, open to all the potentials of the future. The labour force is here, the facilities are here and the location of Blind River is ideal in every respect.

The only thing missing is YOU and your industry and ideas. You will find Blind River a friendly, warm and industry-oriented town— the ideal place for you to locate. 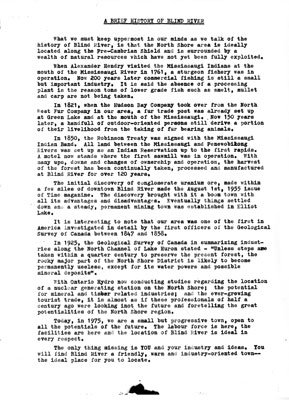