Notes
One of many devices to help ease descent on snow covered hills.

Called a Barienger brake after its inventor, also called a crazy wheel due to its complexity.

It consisted of an endless half mile loop of cable that intertwined in the six wheels of the machine itself.

Apparently it took a real expert to thread the cable through the wheels but it took only one man to operate the machine.

It would be chained to a tree or a stump while the cable was attached to the sleigh, when the operator wanted to stop or slow the sleigh he would pull one of the levers and the wheels would grind themselves into a hardwood block until it began to smoke.

Trying to thread string through the wheels of a scaled down model of a crazy wheel became a popular pastime in logging days.

They say the lumberjacks would nearly go crazy after spending hours trying to get a model scaled properly and thence the name `Crazy Wheel``.
Inscriptions
Accession #980.314.1 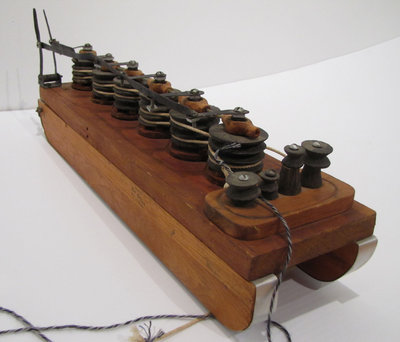