Media Type
Text
Item Type
Documents
Description
This is a three page interview summary about how Mr. Speissman came to Blind River to cook in a lumber camp, and about life without modern conveniences.

Notes
Mr. Speissman describes various transportation methods including taking a tugboat up the Blind River,a steel train to Lake Matinenda and then an alligator (skow) to 68 Bay where he cooked in a lumber camp.

Bill Spiessman was born in a community called Bloomingdale near Kitchener, Ontario in 1880. His parents were of German ancestry which accounts for his surname. There were five children in the family of which only one is alive today where he has made his home in Edmonton.

Bill's father had been a lumberman, then he moved his family to South River where he bought a farm. Bill went to high school in Minnesota, U.S. but did not complete his studies. Instead, he moved to blind River in 1903 to become a cook for the Cook brothers in their lumbering camps. Until 1908, the American hotel on the site where St. Mary's separate School is now situated became his home when Bill was not in the bush.

He met a young lady , Floss Dunbar whose home was in Kinmount, Ontario, and married her on October 5, 1910. The wedding ceremony and reception were both in the bride's house in Kinmount. After a short honeymoon the couple moved back to Blind River. Bill returned to cooking in the camps where Floss could go with him.

Six years after they were married Bill bought a house in town, next to the present funeral home, Floss no longer went to the camps as some of her family came to live with her and later her two children made it necessary for her to stay in town where they could attend school. 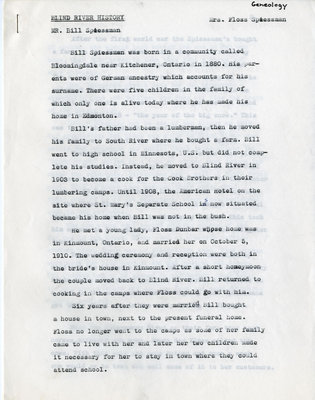