Creator
Debbie Hutchings, Interviewer
Media Type
Text
Item Type
Documents
Description
In this five page interview, Dick Gauthier of Delaware, Ohio, recalls coming to Lake Duborne in 1925 at the age of four and his father starting to build his cottage in 1926. Mr. Gauthier describes life at Lake Duborne, both the practical and recreational aspects.

Notes
Land was leased for 99 years to cottagers by the Battle Point Wesleyan Association. Mr. Gauthier was told that Battle Point got its' name because there was a battle between two native tribes on the water near the point.

Dick Gauthier has been coming to Blind River, and more specifically, Lake Duborne since I925 when he was four years old. His father, George Gauthier and a fellow faculty member at Wesleyan University in Delaware Ohio were looking for a place to build their cottages. At first they tried Northern Michigan but found it too commercialized for their liking.

Next they tried Northern Ontario following the Shipp family ,from, the same faculty, to Lake Duborne. This seemed to be what they were looking for - proximity to a town where they could get supplies and also the wilderness of the bush. The only roads leading to the lake were the ones to Abernot's camp and one to Dufour's farm, which is now called Highway 557 (Matinenda Road). Of course it was not as long as it is today. In 1925 it ended at Dufour's, which was a little way north of the junction between the Blind River and Lake Duborne.

During his first summer at Lake Duborne, Dick can remember the bush on the north shore of the lake being on fire. It started from the Cataract river and burned the woods along the shore as far as Granery Lane. At the time they had been told that it would take five years for the bush to grow back. As it turned out, it took fifteen years for it to appear as if there had been no fire at all. 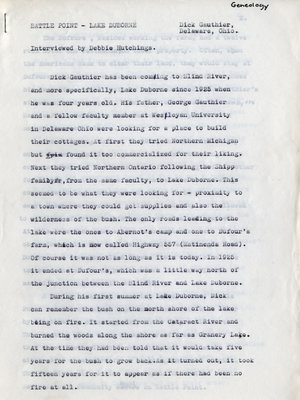